"her final chuckle from the grave" ~ Landfall Review 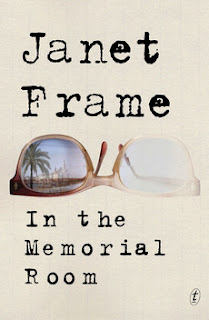 "Frame knows how to hit the sweetest spot when it comes to wry and dry, observational humour. People are ridiculously silly and Frame not only knew that but she is the high priestess of the dark art of conveying it with words. And nowhere in her vast oeuvre is it more evident in her last novel, her final chuckle from the grave, In The Memorial Room."

"This is not a novel as has been suggested, about how miserable Frame found the Katherine Mansfield Residency, but rather one based on her years of observation; watching and understanding, and I suspect being hugely amused, by the social conventions and expectations of this kind of strangeness that is New Zealand Literature. How it can eat you alive, spit you out again or even attempt to replace you with a person who looks far more the part."

"The cult of expectation is alive and well, as are the literary vultures who never read anything, but always mean to. And not only is the satire still relevant, but the writing hasn’t dated either, and that’s Frame’s true genius. In the Memorial Room could have been written yesterday, it’s just that fresh and relevant in the telling."

In the Memorial Room was published in New Zealand and Australia earlier this year (May 2013) by Text Publishing and will be released in the USA next month (10 December 2013) by Counterpoint Press.

Kelly Ana Morey has been in the news this week for winning a Michael King Writers' Centre Maori Writer's Residency to work on her new novel Daylight Second based on the life of racehorse Phar Lap.
Posted by Pamela Gordon