Another speech from the launch of Gorse is Not People 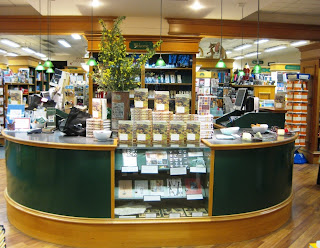 Launch of Gorse is Not People by Janet Frame
15 August 2012, University Book Shop Dunedin
'Thank you' speech by Pamela Gordon:


As Janet Frame’s literary executor, this is a fulfilling moment. There are fine stories in this book that have been silent for too long a time. "Silence has found its voice" – and it has been a huge privilege to be a part of that.
I have a lot of people to thank.


First, to Denis Harold, my co-executor, co-editor, and life partner – who else would have the wisdom, strength, imagination and knowledge to persist on this challenging path? I don’t know. I salute his faithfulness to who Janet Frame was as a person, as an artist and as his friend.
I acknowledge the Frame estate’s literary agent Andrew Wylie in New York (and his colleagues especially Tracy Bohan, Jin Auh and Jackie Ko) for recognising ‘Gorse is Not People’ as a masterpiece and for offering it to the New Yorker. And credit to all the editors of the journals who have enthused about Frame’s unpublished stories (including the New Yorker, Granta, A Public Space, Zoetrope).


Thanks go to Geoff Walker who wanted this collection for Penguin NZ. And to Debra Millar who took the project over from Geoff. Thanks to Catherine O’Loughlin, Gillian Tewsley and Claire Gummer who all worked closely with us on the publisher’s copy edit.
Anna Egan-Reid designed the book and isn’t it an exquisite object? Her work on Janet Frame in Her  Own Words (the text as well as the cover) was rightfully acclaimed when that book won ‘Best Non-Illustrated Book’ in the 2012 PANZ Book Design Awards.


We’re grateful to the Woollaston Estate for kind permission to reproduce Toss Woollaston’s wonderful painting ‘Upper Moutere’ on the dust jacket.
Thanks go to the Hocken Library archivists and other staff who look after Janet Frame’s manuscripts. Thanks also to the Janet Frame Literary Trust, our current and former trustees and other supporters and advisors.


I also want to acknowledge the three authors present here tonight whose names are on the growing list of the writers who have received grants from Janet Frame’s legacy – Peter Olds, Rhian Gallagher and Emma Neale. May there be many more opportunities over the years to add to this list. Congratulations to Rhian for her win this year at the NZ Post Book Awards for the best book of poetry published in New Zealand in 2011. I had the honour of speaking at the launch of Shift here in this bookshop last year and it has been a real pleasure to see that volume getting the accolades it so richly deserves.
And Emma Neale – esteemed Robert Burns fellow this year! (following in the footsteps of Janet Frame and so many others) - thank you so much for your beautifully expressed launch speech tonight. It’s a joy to hear such a sensitive and erudite response to these stories. [Click this link to read Emma Neale's launch speech.]

I’m not going to talk about the stories themselves now, because Emma has introduced them so well.
I just want to say, that if Janet Frame herself were here tonight, she would, I’m sure, be at pains to point out that she wouldn’t want Charles Brasch or Frank Sargeson to be seen as the villains of this piece. Her message for writers who receive seemingly devastating setbacks is this (from her autobiography): “A writer must stand on the rock of her self and her judgment or be swept away by the tide or sink in the quaking earth: there must be an inviolate place where the choices and decisions, however imperfect, are the writer’s own.” 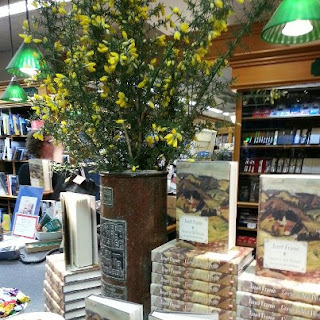 Many thanks to the UBS for hosting this launch. Congratulations on your 50 years in this very building that is so connected to the literary history of Dunedin. May you have many more!
Thanks to Bronwyn Wylie-Gibb and the legendary Bill Noble of the UBS for organising and hosting this launch, and to the folks at Pearson NZ for their generous assistance, and thanks to everyone who has helped out (including picking the glorious bunch of gorse!).


Finally thanks to all of you who are here to celebrate with us, friends, family, Frame fans, teachers, academics, librarians, book sellers, fellow writers, thanks for your company and continuing support.
It is so good to have this launch right here, surrounded by the gorse covered hills of Dunedin.