'the mad wives of modernism' 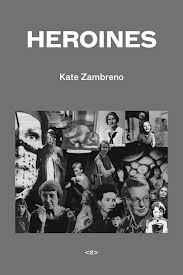 Kate Zambreno’s Heroines is about ‘The mad wives of modernism who died in the asylum. Locked away, rendered safe. Forgotten, erased or rewritten.’

"Their best route out was to prove themselves as great authors - Janet Frame spent eight years in an institution after a mistaken schizophrenia diagnosis, undergoing 200 electroshock treatments before being released after a hospital official read that her [book of stories] had won an award."