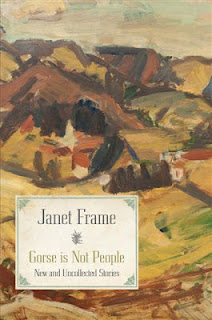 There is a terrific review of Janet Frame's Gorse is Not People in the March 2013 issue of Landfall Review Online.

In 'Going to Town' reviewer Helen Watson White describes the posthumous volume of stories as "a gem of a book, or rather a string of gems, each uniquely coloured, cut and crafted."

White presents an informed and thoughtful analysis of the book, comparing it to the rest of Frame's oeuvre and finding that there is no question that each of the stories in this collection is of the highest quality, indistinguishable from those published in Janet Frame's lifetime:

"I recommend that you read these comic, tragic and tragicomic pieces of prose theatre as I did, without any aids (for I didn't look up the note until I finished each one). I defy anyone to discriminate between those which were published early, or never, between those Frame submitted for publication herself, and those submitted on her behalf. You simply cannot tell, and they are selected and presented here just as they should be, to succeed on their own terms."
Posted by Pamela Gordon