Just a reminder that the annual Janet Frame Memorial Lecture is to be held on Monday 11 March 2013 in Wellington at the City Art Gallery in Civic Square, starting at 6.00 pm.
The lecture is jointly sponsored by The New Zealand Society of Authors (PEN NZ Inc.) and NZ Book Month, this year presented in partnership with the City Gallery Wellington.
"Intended to help improve understanding of what it means to be a writer in New Zealand, the Janet Frame Memorial Lectures deliver an overview of the state of the nation’s literature from the point of view of one of its most active authors."
The annual lecture is given by the current President of Honour for the NZ Society of Authors. Previous Janet Frame Memorial Lecturers were Owen Marshall, Greg O’Brien, William Taylor and Joy Cowley. Janet Frame herself was a previous President of Honour for the NZSA (PEN).

This year the lecture is to be delivered by prominent author Sir James NcNeish who recently published Touchstones: a Memoir.
His lecture is entitled "Two Cheers for Eccentricity" and will consist of a non-academic approach to the subject of creative non-fiction. 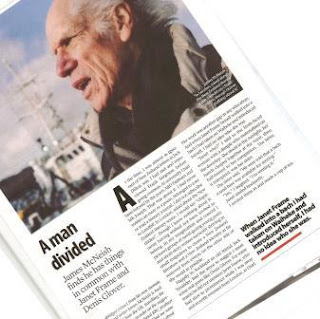 The NZ Listener ran a feature on James McNeish on 7th July 2012
Sir James will be introduced by Dame Fiona Kidman.

The lecture will be held in the Adam Auditorium and entry is free. All welcome.
What a marvellous event this promises to be! I very much regret not being able to attend it.
Posted by Pamela Gordon