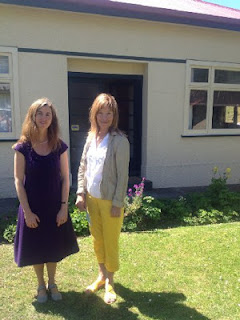 The above photo by Jessie Waite was published in the Oamaru Mail 29 January 2013 in an article entitled "Author's house needs help". (Coincidentally the item appeared on the 9th anniversary of Janet Frame's death but this fact was not noted.)

The article did contain a plea for help from the public to fund vital maintenance work at the house, which is open to the public every summer and by arrangement at other times. Here is a link to a secure website where any Frame fans can help out with this worthy cause: Give a Little.

http://www.givealittle.co.nz/org/FriendsJanetFrameHouse
Posted by Pamela Gordon at 11:14 AM