Janet Frame books in the UK 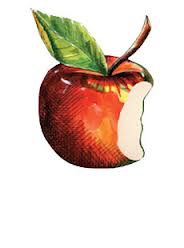 (A bite out of a juicy apple: this is the logo for Virago Books, an imprint of the Little Brown Book Group, Janet Frame's main current publisher in the UK.)

One of the big Janet Frame myths is that her work is and has been predominantly out of print or is characteristically difficult to access. I even had a prominent figure in New Zealand's publishing industry say this to me a year or so ago, apparently completely unaware that almost every one of Frame's twenty or more titles were currently in print in fresh editions in New Zealand. The Myth is, it seems, stronger than the evidence for the eyes to see.

I had a couple of aggressive letters recently from the UK, from Kiwi expats who do not seem to have a working knowledge of Google, seeming to hold me personally responsible for what they perceive as the "unavailability" of Janet Frame's work in London bookshops, and the alleged consequent harm to Frame's reputation in the UK being done by her legal representatives..

Such busybodies clearly have no knowledge whatsoever of the current state of the publishing and book selling industries, or in fact of the previous state of it either. And are obviously ignorant of the huge amount of work it takes to get the number of any author's backlist in print that in fact are in print in Frame's case.

In fact the print cycles for Frame's works have been quite regular across the English speaking world, with separate deals in NZ, Australia, UK, and USA. At any one time, there can be gaps in the availability of the backlist but there is never nothing available.

And anyone who expects the entire backlist of a prolific author to be sitting on the shelves of their local bookstore is, frankly, living in fairyland. If you are so keen to see a minor title, visit a library, or get on the internet and call in a used copy or a copy from somewhere else.

There will always be a delay, for instance, when changing publishers or updating previous editions, negotiating contracts and perhaps unpicking previous unhelpful and lapsed contracts before one can rebuild a new publishing cycle.

Janet Frame left a marvellous bounty of unpublished work which her estate has gradually been assessing, editing, finding publishers for, and releasing at the rate of one every two years since Frame's death in 2004. How on earth can this relentless and generous activity, which has attracted extremely favourable review coverage in the USA, UK and in all those dozen or so languages into which the posthumous work has so far been translated, be interpreted as shamefully neglecting to promote the author?

Not to be mollified, a recent review coming out of London's Kiwi expat community made this accusation:

"These publishing arrangements help to deny Janet Frame an international readership, with the result that this fine writer, a major novelist, remains so little known outside her homeland."

There are currently ten JANET FRAME titles in print in the UK.

The UK edition of the posthumously published novel Towards Another Summer was given rave reviews in several UK newspapers and on the radio. I was myself interviewed by the BBC at the time of UK publication several years ago. Frame has featured on prominent British literary blogs, and a radio serial adaptation of her autobiography was recently broadcast this year on the BBC, catapulting sales of her Virago Modern Classic autobiography to quite near the top of the Amazon bestseller list. Frame's poetry has featured in sessions at UK literary festivals and in 2012 a selection of her recorded poetry went live on the UK Poetry Archive.

In November 2012 a formerly unknown Janet Frame story called "Between My Father and the King" was published in a Remembrance Day themed issue of The Manchester Review:

"Equally famous for her memoirs, poetry and fiction the Manchester Review is delighted to publish her characteristically sidelong, subversive account of her father’s return from what ‘used to be called the ‘Great’ war’."

In 2012 Frame's chief UK publisher Virago had to reprint several of her books: Towards Another Summer, Faces in the Water (brilliantly introduced by Hilary Mantel) and An Angel at My Table. These have all had several reprints in recent years.

It's true that not all has been rosy for the Frame estate in the UK book market. We have had to witness the sale of illicit surplus copies of outdated or substandard Frame editions. For instance, some new-looking outdated copies of Janet Frame's works found their way into the NZ expat community in London in recent years and were incorrectly touted as having been 'donated' by the publisher. In fact the former publisher had no right to 'donate' any copies. Their publishing rights had been reverted years ago, largely due to the publisher being in default of the payment of back royalties. The Janet Frame books had found their way into the expat community by another means entirely, one which was not made clear to purchasers. But the Janet Frame books were nevertheless advertised and sold to the NZ expat community in London as a 'fundraiser', with several of the titles being in direct competition with the new Janet Frame editions at that time being released in the UK by a new and authorised publisher.

If certain expats now want to complain that they can't find new copies of all Janet Frame's books, they might consider the possible effects of such past actions. Which publisher is going to take a gamble on a Kiwi author when they can see that even the author's expat community will not support new publications by the Kiwi author?

And despite all the challenges, here are the current Frame books in print in the UK:

Towards Another Summer (Virago)

The Daylight and the Dust: Selected Stories (Virago Modern Classic)

Storms Will Tell: Selected Poems (Bloodaxe Books) Contains the entire text of The Goose Bath and most of the poems from The Pocket Mirror (2 volumes in one)

The Lagoon and Other Stories (hardback and paperback) Bloomsbury Books.

So, there is a good selection of Frame's novels, stories, poetry, and non-fiction, all in print as we speak, and with a handful more under discussion. In the UK there has been a good selection of Frame's work in print since the early 1980s, and most of these editions only came out of print as the new were coming in, in the past decade. So there has been no break in supply of the best of Frame's work, in the UK at all.

Before that, since 1961 Frame's work was almost without exception published separately in the UK (by WH Allen) as well as in New Zealand and the USA.

If you don't find the Frame current editions stocked by your local good bookstore, complain about it to them.

If you want to try second hand booksellers and libraries, you should be able to find older copies of the Frame titles that were published in the 1980s and 1990s and early 2000s by the Women's Press, Bloomsbury, Flamingo, Pandora and Sirius: Owls Do Cry, The Carpathians, Daughter Buffalo, You are now entering the Human Heart, A State of Siege, Intensive Care, Scented Gardens for the Blind, Mona Minim and the Smell of the Sun, The Lagoon and Other Stories, An Angel at My Table (The Complete Autobiography), The Pocket Mirror.

And of course every single Janet Frame title ever published has been re-released in New Zealand over the past decade and can be purchased over the internet, if the ten titles available in the UK are not sufficient.
Posted by Pamela Gordon at 8:22 PM

'So little known outside her homeland'! Only a New Zealander could say that. The national bird should be an ostrich not a kiwi.