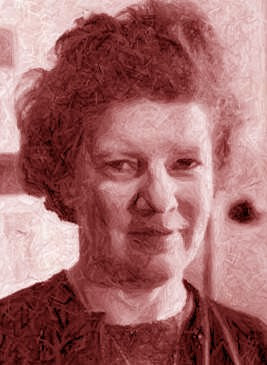 Janet Frame was a redhead. Not only that, she had famously wild frizzy hair. It's the first thing everyone who met her when she was young, mentions about her.
We know that as a child she hated the constant attention to what was regarded as her 'strange' hair. It seems she became quite hypersensitive about it, being subjected to the constant taunting from a very young age, that almost all redheads are subject to. Probably the frizzy hair only increased the mockery. One can imagine the teasing was mostly a bantering good natured but aggressive "Hey, ginger!", but she has made it clear in her writing that she sometimes wished the earth would swallow her up.
Now what is it about red hair, that gets people's backs up?
I have been interested to find that I can identify the redhead effect in some of the commentaries on Janet Frame, in which clearly someone who met her superficially has formed a strong opinion that she was very odd (often they'd been told this beforehand so were ready for this interpretation) - but then it seems that without realising it, they have included her 'crazy' hair as one of signals of her difference, or her 'eccentricity', or even of her 'madness'.
Here's an example of a report, from an eyewitness who met Janet Frame shortly after she was released from the years of abusive punishment in psychiatric hospitals, from his book* published in 2008:
"there was something very strange about her - shyness, hypersensitivity, timidity, fear, to the point of morbidity, certainly; but even beyond all that, something intangible I felt very strongly, with a sort of animal apprehension when we were young; something that expressed itself physically, in her body language, her clothes, but in the body itself, neck, skin, hair."
So the red hair effect is even felt by people who one might have thought were otherwise rational!
It's often mentioned as if it was a 'symptom' of what is commonly regarded as her 'oddness'.
And yet, how could she be responsible for the red hair? In what way is red hair dysfunctional psychologically?
It's not unreasonable to suggest that because her hair was regarded as so odd, that it led observers to assume she must be a strange abnormal person, and so her red hair may well have contributed to the misdiagnosis of schizophrenia.

*CK Stead, Bookself (2008). One can understand the shyness Stead describes, in the context of Frame's recent return to the world, but 'morbidity' seems an excessive word in that Stead also makes it clear elsewhere that Frame was friendly, warm, funny, well-read, smart and a great conversationalist, and the fact that she was writing one of NZ's most highly acclaimed novels of all time, at the time, does indicate she can't have been in too bad a condition. (A startling contradiction to his sketch here!)
It's poignant to hear of the fear Frame showed at that time, undoubtedly the post-traumatic result of the treatment she had sustained, and remarkable to realise what courage it must have taken to mix with the complicated sohisticated literati she found herself amongst. How strong and determined she must have been, to survive, and to get on with her writing now she was free.
It should also be noted that Stead's observation of Janet Frame as having strange clothes, is likely to indicate that there is also a class judgement being made. Most of the Sargeson circle were firmly of middle class origins. It's pretty clear that if Janet Frame had been from a wealthier family of higher social status, that she would not have been labelled as insane, and her 'eccentricity' would have been overlooked just as the middle class are blind to their own peccadilloes.
Posted by Pamela Gordon at 11:36 PM