Janet Frame's career is not over 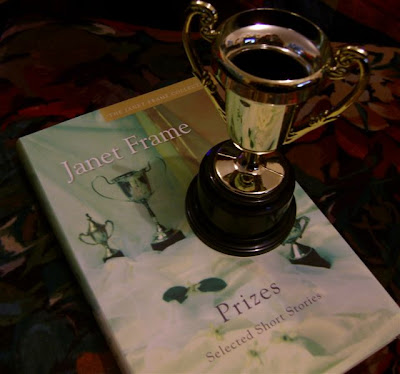 “I’m a short story addict, both reading and writing them,
and I always keep hoping for the perfect story.”
- Janet Frame
Last week the University Bookshop in Dunedin hosted the launch of the NZ edition of Prizes: Selected Short Stories by Janet Frame. It turned out that the launch coincided with the fresher Toga Party at the University of Otago, in which thousands of students, some draped with sheets and some not, later battled in the streets hurling raw eggs (and worse things) at each other and at the general public.
The book launch had a very good atmosphere, and there was a reasonable crowd considering there was a riot simmering outside, with masses of drunken students walking past, chanting aggressively, as they gathered nearby for their parade.
Luckily the students were oblivious to the literary gathering. Meanwhile, barricaded inside the bookshop there was a fantastic atmosphere and Emeritus Professor Jocelyn Harris gave an excellent speech, in which she quoted some passages from several stories and made connections and proposed analyses that were genuinely enlightening, and that many of those listening said had made them eager to read the stories in a new light.
Dunedin's Channel 9 TV had earlier interviewed yours truly along with UBS buyer Bronwyn Wylie-Gibb at the bookshop, about the release of this tenth volume in the Janet Frame Collection.
I also gave a short speech at the launch, outlining the timeline for the Janet Frame Literary Trust, which was founded ten years ago by Janet Frame, with great forethought, to protect her posthumous interests.
I then reviewed the progress that the Janet Frame Literary Trust has made in the five years since Janet Frame's death. It was cause for celebration that the publication of Prizes meant that all Janet's back list was now simultaneously in print in New Zealand. (At any one time there were usually up to ten titles in print in NZ, but some of the lesser known novels might not have been reprinted if the estate had not agreed with the publisher to issue the double volumes.) The whole of the attractive uniform edition was on display to admire. And of course not only is the entire back list now in print, but of course there is also the freshly illustrated children's book, the posthumous book of poetry and the posthumous novel, all of which have been critically acclaimed as well as strong sellers.
I spoke briefly about the reason for the release of a "Selected" ("best of") published stories, rather than an enormous door-stop "Collected" stories. I pointed out that the definitive "Collected" ("complete works") editions are usually issued at the end of an author's career. But the Frame estate is still publishing "new" formerly unpublished stories (as for instance the two remarkable New Yorker stories in 2008), and so it would be premature to issue a "Collected" stories until we have assessed all of the unpublished story manuscripts.
I assured those listening, to their amusement, and enthusiastic applause, that: "Janet Frame's career is not over."
The first reviews of Prizes: Selected Stories are in:

Graham Beattie on his Beattie's Book Blog declared of the selection of 42 stories:

Elizabeth Alley reviewed the collection in the NZ Listener (archived online after March 12).

"The real value of such a collection is the opportunity to appreciate the versatility of her style, the range and power of her writing, and - yes - "the magic of words" over stories that spanned 1952 to 1983."
Posted by Pamela Gordon at 4:42 PM