A bro'Town at my Table 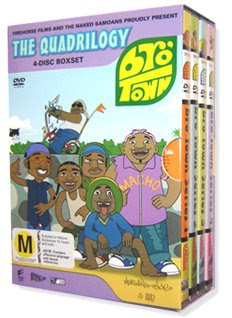 A wonderful surprise for me today - in the mail I received a gift box containing the 4-disk set of DVDs of all four bro'Town hit series.

The New Zealand TV phenomenon bro'Town has often been called "The Simpsons of the South Pacific".

It's a uniquely Kiwi satirical animated show put together by some of NZ's best comedy talent. It is at times edgily non-PC, but always lovably so, and full of local references. Among the in-jokes are lots of allusions to the milestones of New Zealand literary and movie culture.

The guys at bro'Town read my blog post A Catch Phrase on My Table and noticed that I cited their use of the new language pattern that has grown out of the iconic status of An Angel at My Table. The first four series of bro'Town include episodes called "A Maori at My table", "A Chicken Roll at My Table" and "An Alien at My Table".

They were delighted - so much so they sent me the DVDs to enjoy, and also a framed poster of the cover art of 'A Maori at My Table" to add to my collection of examples of the catch phrase. It's already up on the wall over the back of the TV set. 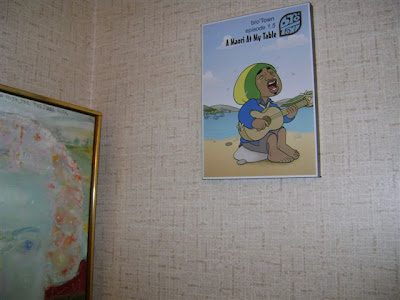