I was recently reading some commentary on the sad case of the death of David Hockney's assistant, a young man who had a shock of  ginger curls, and I was interested to see that a contributor to the discussion mentioned that the assistant "looked like Janet Frame".

It is widely known - in educated circles at least - that Janet Frame had a wild mane of reddish hair, and people with similar untameable red hair can find themselves being compared to her. I know that some are even given (or give themselves) the nickname 'Janet Frame'.

And apparently almost all a Janet Frame impersonator has to do is don a curly orange wig in order to seem 'authentic'. Everybody 'knows' it's 'Janet'.

But what shade of red was Janet Frame's hair? Was it orange? True or False? 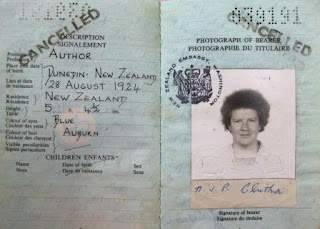 FALSE. Janet Frame did not have the 'orange' shade of red hair, she had the kind of dark red hair sometimes referred to as 'auburn' hair, as noted on the passport pictured above.

(The passport is signed N.J.P. Clutha which was her legal signature after she changed her surname from Frame to Clutha by deed poll in 1958).
Posted by Pamela Gordon