The Tasman Sea lies between New Zealand and Australia, and the Australasian slang term for making that journey is "crossing the ditch".
Janet Frame has long received a warm response to her work in Australia. The great Patrick White became one of her earliest and most ardent admirers, and several of her books have had very successful Australian editions. The posthumous novels Towards Another Summer (Random House) and In the Memorial Room (Text) were both first released in Australia and one of the all time bestselling editions of Janet Frame's first novel Owls Do Cry was the Australian Sun Books paperback (sub licensed to Angus and Robertson).
So it's a great pleasure to announce that there is soon to be an Australian edition of Janet Frame's posthumous story collection,
published by independent publisher Andrew Wilkins (Wilkins Farago) who had earlier published Frame's posthumous poetry collection The Goose Bath. 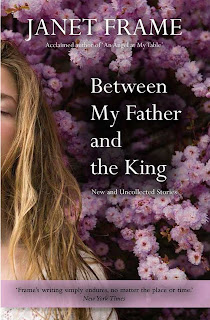 Between My Father and the King
New and Uncollected Stories
by Janet Frame
Wilkins Farago, Australia
release date: November 2013
ISBN 9780987109972
First published in 2012 by Penguin Books NZ as Gorse is Not People
Also published in the USA by Counterpoint Press (2013)
This highly acclaimed edition of stories was a top ten NZ fiction bestseller in New Zealand for the 2012 year and the American edition has received rave reviews in USA papers. A cover review in the New York Time Book Review declared:
"Frame's writing endures, no matter the place or time."
REVIEWS
Jane Ciabattari reviewed Janet Frame's story collection Between My Father and the King (Counterpoint 2013) for the Boston Globe (25 May 2013):
"The late New Zealand literary master Janet Frame’s inimitable voice — poetic, acerbic, piercing — is as fresh now as a half-century ago, when her stories and novels were drawing international attention. The 28 stories in her new posthumous collection are a reminder of her legendary storytelling gift and of the miraculous ways in which her life as a writer evolved."

"Frame went on to become a groundbreaking author, original in language and subject matter, astute at revealing hypocrisy and brutality, particularly as it arose in lives of women and marginalized people like the patients she encountered during her stays in psychiatric wards."

"Frame’s is an acute vision, attuned to the full spectrum of human experience. The kingdom of her spacious imagination is fully displayed in this collection."
Publishers Weekly picked Janet Frame's Between My Father and the King as one of their 'Best new books for the week of May 13, 2013.'

The PW starred review for Between My Father and the King says that it "showcases her extraordinary gifts as an imaginative storyteller with a singular viewpoint. Frame grasps an image and the emotion behind it in a few spare words."

"A treasure-trove of stories."
"A powerful collection."

"writerly genius in every sentence"
"told with charming and often wicked wit"
The Christian Science Monitor included Between My Father and the King in their list of 12 promising fiction titles for Spring 2013:

"This posthumous collection ... takes readers from despair to wonder and on to deep meaning, always accompanied by powerful writing."
New Zealand Reviews
(where the collection is called Gorse is Not People):
"Frame's storytelling explodes off the page with the felt intensity that characterises her as a writer."

"It is impossible not to be enchanted by stories like 'Between My Father and the King' and 'The Plum Tree and the Hammock'."

"Is there anyone after Frame who gets into the minds and hearts of children as she does?"

"These stories are sharp, freshly colloquial, funny and poignant."

"Gorse is Not People is a valuable and welcome addition to the Frame canon, reminding us what we already know - how good she was, and how much we need her."

(Lydia Wevers, review of Gorse is Not People in the NZ Listener, 25 August 2012.)
Landfall Online:
"This is a gem of a book, or rather a string of gems, each uniquely coloured, cut and crafted."
"a surprise present like no other."
Posted by Pamela Gordon