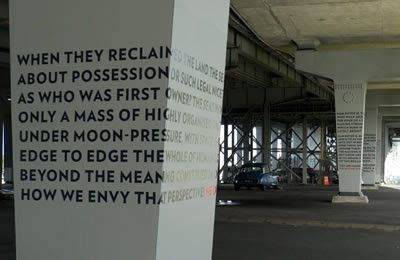 Words from Janet Frame's poem 'The Road to Takapuna' (1964) adorn a pillar literally supporting a northbound lane of the Auckland Harbour bridge.

The New Zealand Transport Agency - Waka Kotahi has unveiled an innovative cultural enhancement of the underside of the Auckland Harbour Bridge. Their press release states:


The NZ Transport Agency has mixed nuts and bolts with some of New Zealand's best written and spoken words to complete the first stage of a landscaping project under the northern end of the Auckland Harbour Bridge.
Words spoken or written by a prominent Maori chief from Auckland/Tamaki Makaurau and seven of New Zealand's well known writers have been painted on piers supporting the box girder that carries northbound traffic above Stokes Point.
"Given the importance of the bridge as the critical transport link across the Waitemata Harbour, it is fitting to recognise these eight New Zealanders who themselves have links with the harbour and the North Shore," says the NZTA's acting State Highways Manager for Auckland and Northland, Steve Mutton.
The paintings include excerpts of poetry and prose written by Janet Frame, Bruce Mason, Frank Sargeson, A.R.D. Fairburn, Maurice Duggan, Kendrick Smithyman and Robyn Hyde (Iris Wilkinson). There is also a quotation from the Waitakere chief, Te Waatarauihi, speaking in 1860 of his relationship to the area.
The paintings are known as 'The Trestle Leg Series' - engineers describe the piers supporting both box girders (clip-ons) at Stokes Point as trestle legs.

The quotation from Janet Frame comes from her poem 'The Road to Takapuna' written after her return in late 1963 from living in the UK, and published in Mate magazine (No 12) in June 1964. Among other things, the poem comments on the differences Frame encountered on her return, including the widespread 'reclamation' of land that had formerly consisted of mangrove swamps and mud flats.

It is fitting that Janet Frame's extensive links to the North Shore are recognised by her inclusion in this project. Frame first became associated with the North Shore of Auckland when her sister June moved there to settle after her marriage to Wilson Gordon in 1948.

While staying with the Gordons in Northcote in 1955 and 1956 Frame also famously boarded during the weekdays with author Frank Sargeson, sleeping and working in an army hut in his back garden while she wrote her second book, the novel Owls Do Cry.

I noticed in some media reports this week that the odd journalist still believes that Janet Frame was an unpaid guest of Sargeson's, and that her brief time living in his hut comprised her only association with the North Shore.

It is a little known fact (verifiable by a careful reading of Michael King's biography) that during the time Frame boarded with Sargeson, she stayed every weekend with the Gordons. (One exception would be the weekend in late 1955 that her mother died; griefstricken, she stayed in the hut.)

Another misconception that would be easily cleared up by referring to the accurate historical record, would be the suggestion that Frame strained Sargeson's meagre financial resources. In fact Frame paid Frank Sargeson one pound per week for her board and lodging, from the three pounds per week benefit that he had helped her obtain. Onlookers at the time seem to have been unaware of either of these circumstances, as one hears of bizarre anecdotes to this day claiming that Frame frequently locked herself away and refused food while she was living in the hut at Sargeson's place. These stories perhaps conflict with other exaggerated claims that Sargeson exhausted himself and his resources by waiting on 'Janet' hand and foot, 24 hours a day, 7 days a week. It is possible that when she had allegedly shut herself away, Frame wasn't even in the hut at all, but the local gossips who were snooping around wouldn't have known that.

Even though the Michael King biography clearly indicates that most of the time Frame lived only part time with Sargeson, and that she paid him board and lodging, I find that these facts are not only unknown, they are also rejected as being somehow offensive to the memory of the generous self sacrificing Sargeson. Again the seductive legend, built up over decades of retelling, is stronger than the evidence.

Over the years Frame returned to the Shore many times, visiting various friends or family members. She also briefly rented accommodation in Northcote, Takapuna, and Devonport, and owned her own homes in Glenfield (in the 1970s) and Browns Bay (in the 1990s).
Posted by Pamela Gordon