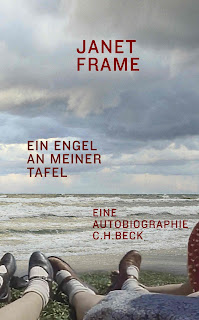 AN ANGEL AT MY TABLE  is the title of Janet Frame's most famous book, the second volume of her bestselling autobiography, but the name now generally refers to the whole trilogy (also including Volume One: TO THE IS-LAND and Volume Three: THE ENVOY FROM MIRROR CITY).

The phrase 'an angel at my table' refers to a poem (written in French!) by the great German poet Rainer Maria Rilke, Janet Frame's favourite poet.

Publisher CH Beck is releasing a new edition of EIN ENGEL AN MEINER TAFEL later this year, to celebrate the special status of New Zealand as guest at the Frankfurt Book Fair. 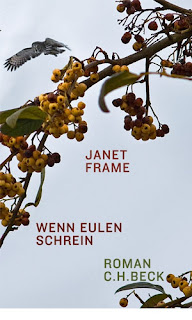 Two other Janet Frame titles are being published by Beck in German translation this year: a new edition of Janet Frame's first novel, OWLS DO CRY (WENN EULEN SCHREIN) and the paperback edition of TOWARDS ANOTHER SUMMER (DEM NEUEN SOMMER ENTGEGEN) which recently enjoyed great success in a hardback edition. 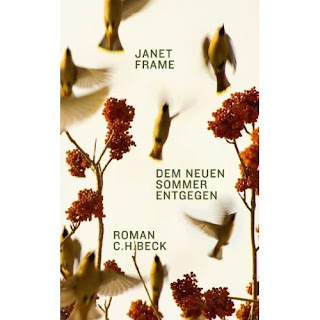 As is practically par for the course with Janet Frame, there is some misinformation surrounding the re-release of these three titles in Germany this year.

In some places you may find the suggestion that Janet Frame was 'out of print' in Germany before the New Zealand Government began to promote New Zealand literature in Germany ahead of Frankfurt 2012. This couldn't be more wrong. Janet Frame is one of a handful of New Zealand authors who have been regularly published in Germany (in her case, since 1961).

And all three of the titles being re-released this year by C H Beck were in fact "in print" in German translation the last couple of years (two of the titles were in print with other publishers and the rights were only recently reverted so that Beck could publish their updated versions of older translations).

Another mistake is that three books (two novels and an autobiography) are being represented in various places on the internet either as all three being "autobiographical novels", or, on the other hand, as all three comprising Frame's famed three volumes of "autobiography".

As literary executor, I did put some energy into trying to correct the misinformation but once a horse has bolted onto the internet, there's not much you can do.

In any case, anyone who reads all three books will find many rich correspondences between the life and the work. That's the power of Janet Frame's writing. You believe her, and you know she is speaking with authenticity, even when you are in her fictional world of the imagination. 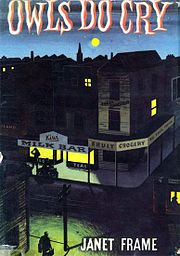 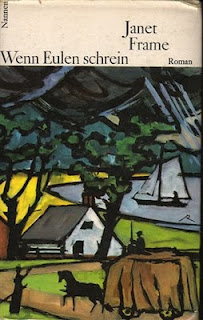 All these gorgeous covers are works of art in themselves! I would love to see them all together as an exhibition.

Aren't they great? The original Owls Do Cry cover is a classic, and I have always loved the cover of the German first edition too, but the new Wenn Eulen Schrein cover is brilliant too.

We did actually have an exhibition of the best of the OWLS DO CRY covers to that date, a few years back, on the 50th anniversary of publication, at the Auckland Writers & Readers Festival.