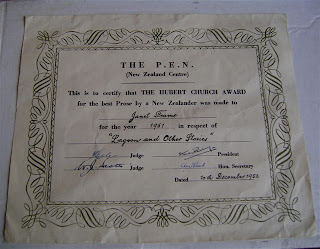 The Hubert Church Award for the best Prose by a New Zealander:
the prize that saved Janet Frame from a lobotomy
when it was given to her sixty years ago.


Prizes, Awards, Honours and Fellowships earned by Janet Frame
for her short stories, poetry, novels and non-fiction
( a selected list only)

1952 Hubert Church Award (The Lagoon and Other Stories)


1980 NZ Book Award for Fiction (Living in the Maniototo)


1984 Turnovsky Prize for Outstanding Achievement in the Arts


1985 Wattie Book of the Year (The Envoy from Mirror City)


1990 Member of the Order of New Zealand