The good word on Frame: "captivating" 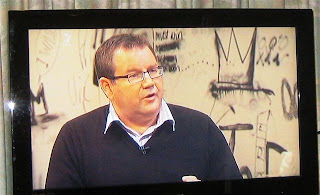 Here is an archived link courtesy of TVNZ "on demand" to a recent TV interview that the deputy leader of the NZ Labour Party Grant Robertson gave on the (alas now defunct) book show 'The Good Word': Series 4, Episode 12 (The interview takes place at 7.00 minutes but the whole show is worth watching!)

Robertson was appearing on the regular part of the show where a prominent New Zealander was invited on to the set to talk about their favourite New Zealand book.

Grant Robertson spoke passionately and articulately about his favourite New Zealand novel, Janet Frame's Owls Do Cry, and he also spoke with a great deal of knowledge and insight about Janet Frame's autobiography, and about her place in New Zealand history.

Host Emily Perkins introduced a slightly bizarre note when she asked Grant Robertson whether he had read the recent fan fiction novel about Frame written by one Professor Evans. This was rather like asking a gourmet to compare the cuisine of a Master Chef to the subtle taste of a bag of Twisties! Children and ignorant people might prefer junk food to the real thing, but a genuine Frame fan is hardly going to be fooled by, or even interested in, such a counterfeit. Robertson seemed a little flummoxed by the question. Of course he hadn't looked that book out, although he had heard it was controversial.

The fan-fiction novel is set in the era when Frame wrote Owls Do Cry, but all resemblance ends there. Evans changes all the facts of Frame's life, her personality and especially her relationships, and attributes to her an arid disconnected "theory of language" that has no resemblance to Frame's own well-expressed thoughts about her writing. What could you possibly learn about her?

Anyway it was Janet Frame's writing that Grant Robertson was there to celebrate, not a third-hand third-rate exploitation of her fame and her talent. I admired the way that he firmly brought the focus of the conversation back to Janet Frame's writing itself, and to her own reputation. As Grant said, the autobiography traces Janet's journey in New Zealand and overseas, and back again, "to find out who she is rather than who people tell her she is".