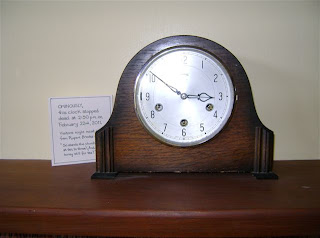 The chiming clock on the mantelpiece of the Janet Frame House at 56 Eden Street Oamaru was damaged during one of the awful series of aftershocks from the 2010 Canterbury earthquake. As can be seen on the face of the clock, it stopped as a result of a large jolt at just after ten to three on the afternoon of the 22nd February 2011. Curator of the house, Ralph Sherwood, says that the clock cannot be persuaded to start again.

The house is open to the public every day from 2 pm to 4 pm during the summer months.

I was at the house yesterday, paying my respects ahead of the eighth anniversary of Janet's death, and there was a constant stream of visitors enjoying the Oamaru sunshine. The comments in the visitors book were delightful to read as Frame fans are always very moved to at last spend time in the house where the great writer grew up and about which she has written so much. I noticed that a German tourist stated that she had come to New Zealand chiefly to see this place.
Posted by Pamela Gordon at 4:19 PM