The greatest love story ever told 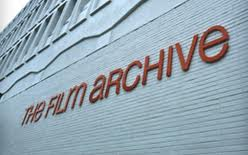 A new radio documentary has been broadcast on Radio New Zealand this week to mark the tenth anniversary of the death of Jonathan Dennis, the first director of The New Zealand Film Archive.

The Janet Frame Literary Trust was of course happy to cooperate with the producer Gareth Watkins by giving permission for the use of the Frame copyright for the purposes of this timely tribute to a much loved fellow New Zealander.

The recording of the Janet Frame story was originally made for Jonathan Dennis’s Centenary of Cinema programme in the late 1990s.

'The Pictures' was first published in The Lagoon and other Stories. It's a glorious and poignant observation of a mother and her young daughter being swept away from their daily life by the magic and romance of a trip to the movies. The story is also reproduced in several other 'best of' selections of Janet Frame's stories: You are Now Entering the Human Heart,  Prizes,  and The Daylight and the Dust.

"They stood outside the theatre, the woman in the black coat and the little girl in the red pixie-cap and they looked at the advertisements.
It was a wonderful picture. It was the greatest love story ever told. It was Life and Love and Laughter, and Tenderness and Tears."

“Seven thousand feet, the woman said to herself. She liked to remember the length of the picture, it was something to be sure of.
She knew she could see the greatest love story in the world till after four o’clock. It was nice to come to the pictures like that and know how long the story would last.
And to know that in the end he would take her out in the moonlight and a band would play and he would kiss her and everything would be all right again."
Posted by Pamela Gordon