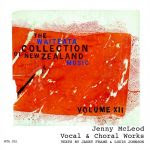 The three song cycles are:

FROM GARDEN TO GRAVE

The CD has been published by the Waiteata Music Press as part of the Waiteata Collection of New Zealand Music:

Thanks for this information, Pamela. I have contacted 'sounz' to see whether the CD is in stock. I also am waiting for a copy of 'In Her Own Words' to arrive from Dunedin. Even though not Janet Frame news, I have received a copy of CD of music by Arnold Trowell who was a childhood friend of Katherine Mansfield. The NZ cellist, Martin Griffiths has recorded the Trowell works which Manfield was well familiar with and would have heard performed.