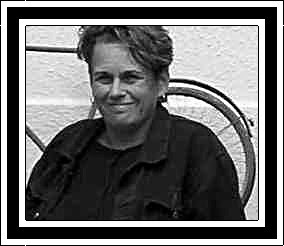 Another sad loss to Janet Frame's "inner circle" of family and friends occurred last weekend with the untimely death (after a short illness) of Stephanie Baxter. Steph was raised by her grandmother Jacquie Baxter who was a close friend of Janet's. The photograph above was taken on February 15th 2004 after the interment of Janet Frame's ashes in the Frame family grave at Oamaru. Steph and several other members of the Baxter whanau attended Janet's family funeral as well as her State Memorial Service, as well as the private burial ceremony, each time honouring Janet's memory with heartrending and beautiful karanga and waiata. Janet's connection with Steph had been a long one, as she had kept vigil with the Baxter family in Dunedin, in the hours before Steph's birth. My brother Neil and I attended Steph's tangi last week at Kapiti College Marae, representing the Frame estate and the Gordon family, and also expressing our own grief. Steph will be sadly missed by her partner and children, her mother and her "mum", and her brother and the rest of the whanau, and the many other people who will mourn for her.

According to the website www.atiawa.com, the three white feathers - Te Raukura - are worn by Taranaki tribes "to demonstrate their continued commitment to resolve conflict through peaceful means". Steph inherited this tradition of non-violence and passive resistance from the Parihaka prophets through her Maori ancestry and there was also a pacifist legacy from the Baxter clan of Brighton near Dunedin (her great-grandparents Archibald and Millicent Baxter were notable anti-war activists). At Steph's funeral her brother-in-law spoke in his eulogy of Steph's remarkable gift of unconditional love, and of her ability as a peacemaker. May she rest in peace.