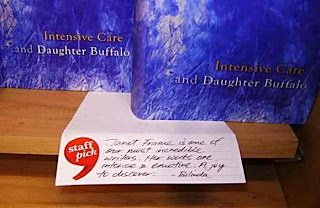 Spotted this staff recommendation at the big Auckland City Whitcoulls branch on the corner of Queen and Victoria Streets:
"Janet Frame is one of our most incredible writers. Her works are intense & emotive. A joy to discover."
There was a brilliant display of all the "Janet Frame Collection" at this bookshop. The Auckland CBD Borders shop is similarly generously stocked.
Every single one of Janet Frame's 12 novels is currently in print from Random House New Zealand, as well as most of her short stories and both her poetry collections, and the children's book she wrote. And the three volumes of autobiography are in print separately, along with an omnibus edition!
Quality independent and university bookshops will usually have a good supply of Janet Frame's books (along with other literary fiction).
Alas not all of the mainstream stores have such a good offering of Janet Frame books on sale, especially out in the provinces, where they only seem to know about Dan Brown and Harry Potter. Surely not every brain cell is confiscated when citizens leave the large cities?
Quite often I will be browsing in a bookstore that is selling a book like "501 Great Writers" - which features Janet Frame - but try looking for a representative sample of her work. You're likely to be disappointed.
I'm often asked by visitors to New Zealand why it seems to be so hard to buy Janet Frame's books here in the very country that produced such a great writer on the world stage? It's a good question...
The pictured double edition containing INTENSIVE CARE and DAUGHTER BUFFALO is a particular treasure. It weighs a kilo and the novels are both deep and significant, major works of literature, but they're not any harder to read than any other work of literary fiction.

As Stephanie Dowrick once commented, "It is impossible to call yourself well-read if you have not yet discovered Janet Frame" (Sydney Morning Herald). I could extend the sentiment to say that someone who hasn't read Intensive Care or Daughter Buffalo or Living in the Maniototo can't claim to know Janet Frame's work well.
Posted by Pamela Gordon