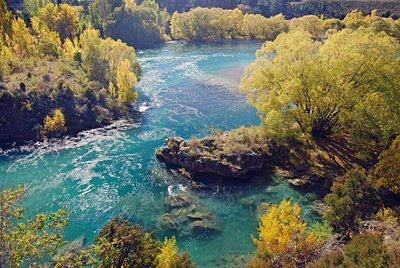 Janet Frame loved the magnificent Clutha River that flows through her home territory in the lower part of the South Island of New Zealand. In 1958, in London, once her birth name "Janet Frame" had become too well-known for her to be comfortable living with it on a daily basis, she changed her name by deed poll to "Janet Clutha". In this way she was able to live anonymously for the rest of her life, reserving the name "Janet Frame" for publishing and literary purposes only.

As it has often been pointed out, she was fairly unusual in that she wrote under her proper name and lived under her pseudonym! It is not of course unusual for those who have achieved celebrity or notoriety to use assumed names in the attempt to avoid publicity and harassment, so that they can live as normal a life as possible. In Janet Frame's case, her apparent invisibility did help to serve the myth that she was some sort of anti-social recluse. The myth could not have been further from the truth, as anyone who lived in her neighbourhood or knew her as "Ms Clutha" (or more correctly "Dr Clutha") could testify, but it's true that it was one myth that Frame did not discourage as it meant that she had fewer interruptions to her work.

Janet Frame described her first view of the Clutha River in her autobiography:

From my first sight of the river I felt it to be a part of my life (how greedily I was claiming the features of the land as ‘part of my life’), from its beginning in the snow of the high country (we were almost in the high country), through all its stages of fury and, reputedly now and then, peace, to its outfall in the sea, with its natural burden of water and motion and its display of colour, snow-green, blue, mud-brown, and borrowing rainbows from light; and its added burden rising from its power, of the dead – withered or uprooted vegetation, the bodies and bones of cattle, sheep and deer, and, from time to time, of people who drowned.

After spending a year confined in the city, studying, writing, conscious always of boundaries of behaviour and feeling, in my new role as an adult, I now came face to face with the Clutha, a being that persisted through all the pressures of rock, stone, earth and sun, living as an element of freedom but not isolated, linked to heaven and light by the slender rainbow that shimmered above its waters. I felt the river was an ally, that it would speak for me.

I fell in love with Central Otago and the river, with the naked hills covered only in their folds by their own shadow, with their changing shades of gold, and the sky born blue each morning with no trace of cloud, retiring in the evening to its depth of purple.

I saw your spectacular country as a visitor last year. Absolutely splendid. BTW, this is a fantastic idea for a blog.

Thanks Pamela, for this wonderful tribute. I'm also pleased that you've used my photo of 'Heaven's Gate' on the Upper Clutha, and included a link to the Save The Clutha website. As Chair of the Clutha Mata-A River Parkway Group, I'm aware of Janet's deep-felt connection with NZ's great Clutha. It's easy to see why she loved it. There are some stirring images here www.mightyclutha.blogspot.com

Many thanks Lewis. I'm glad to be able to acknowledge your copyright, and to promote the good cause. That's my favourite of the many beautiful photos of the river across the "Save the Clutha" pages.