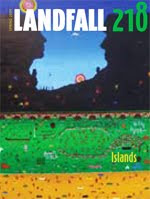 Landfall 218 has been guest edited by poet and critic David Eggleton.
The title for this issue is "Islands" and it's a clever name for many reasons. A part of the volume has been most appropriately set aside for a tribute in honour of the 100th birthday of Landfall's founding editor Charles Brasch. The tribute section includes interesting reminiscences of Charles Brasch the person from some of his friends (Peter Entwistle, Alan Roddick, and Margaret Scott) and features several sterling poems dedicated to his memory by Peter Olds, Peter Bland, Sue Wootton and -- Janet Frame!
There's also a nice illustration of Brasch's poem Islands by Greg O'Brien. Of course this is the poem from which Janet Frame derived the title Towards Another Summer for the novel written in 1963 that remained unpublished during her lifetime.
To commemorate the friendship between Charles Brasch and Janet Frame, I approved the printing of the full text of a letter Janet Frame wrote to Margaret Scott in 1973, not long after Charles Brasch died. Janet was preparing to leave for her year as Katherine Mansfield fellow at Menton in the South of France, and she had asked Margaret Scott (a former fellow) for some tips about what to expect, and what to pack. Margaret, in her turn, had asked Janet whether she and Charles had ever talked about their own deaths, as this was a topic he had resisted discussing. Janet's letter, with its response to the hints about Menton and the further description of one particular memorable encounter with Charles, seems very timely not just because this is the Brasch centenary year, but because 2009 also marks the 40th anniversary of the establishment of the Katherine Mansfield Fellowship (now known as the Mansfield Prize).
Janet Frame also sent a poem to Margaret, which has been reprinted with the letter, called "Poets", comparing the death of a young and an old poet. The poem had never been shown to anyone else, except Charles, and Janet now dedicated it to his memory. The poem was first published in The Goose Bath (2006) and it has already become somewhat of a classic statement for the death of an artist, having been read out at several prominent funerals either at the request of the mourners and even in a couple of cases to my knowledge, because of a death-bed request.
Landfall 218 also contains a wide range of other literary and artistic delights, including fresh work from contemporary authors, an outstanding winning essay of the Landfall essay competition, and much other interesting non-fiction as well as reviews.
Posted by Pamela Gordon

I just stumbled across this site while doing some odd googling for Landfall. What an excellent idea. I like the name too. :)