Out of the Frame 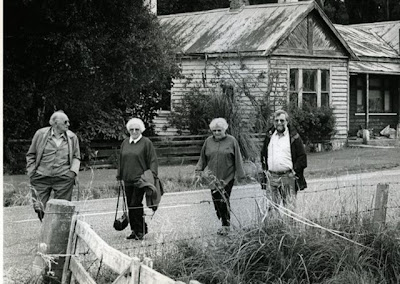 This is a poignant image for me. From the left you can see my parents Wilson and June Gordon, Mum's sister Janet Frame, and Janet's biographer the popular New Zealand historian Michael King. The photograph was taken by our friend Reg Graham. In the space of just over four years, all five of them have died.

I just found this Pamela, it made me come over all teary!

Yes, I think of it like a tsunami. The same wave has taken other dear ones too - Hone Tuwhare, John Money, Ruth Dallas, and Paul Wonner.
There's a mighty feast going on somewhere, in memory anyway.