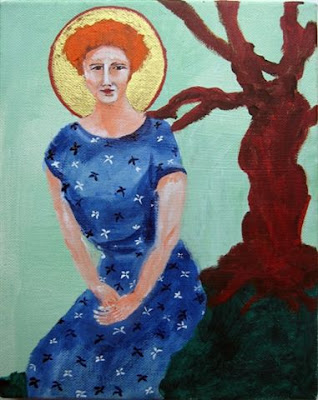 What a great day we have had here on earth. $10,000 of Janet Frame's endowment money was given in the Janet Frame Literary Trust Award, to encourage a fine poet. I think Janet would have been very pleased to support her. Like Janet Frame, Rhian Gallagher was raised in the coastal South Island, and went away and lived in London for a long time, but she too has come back to New Zealand.

The trustees of the Frame Estate had our usual annual slap-up meal to commemorate Janet's birthday, and we had much to celebrate. Although we did miss Janet's actual presence at the table, because she always dearly loved to have a good feed in convivial company. She had a hearty appetite for food and conversation, and the ambience when she was there, was always lively and clever and punctuated with uproarious laughter because of her quick wit.

But she was in any case the angel at our table as we reviewed a sparkling year of tending her garden. The release of the posthumous novel, the Montana award for the posthumous poetry, the New Yorker stories, the refreshing of much of the back list in New Zealand and the release of new editions in Australia and the UK, with plans for more renovation and expansion. We're delighted with the sale of US rights for Towards Another Summer, and the list of countries seeking rights to translate it is growing every week. The Australian edition of the Goose Bath is to be launched in a few weeks. All this and more.

Early in the morning there was a knock at the door and a courier delivered a box containing the advance copies of the Bolinda audio book of TOWARDS ANOTHER SUMMER. It seemed like the arrival of a gift!

And in my email inbox was a lovely letter from an expat Kiwi who is living in London, who has been a longterm fan of Janet Frame's work, and was just writing to thank us for bringing out Towards Another Summer - which she had read and loved - and for keeping her up to date with all things Framous, by the web site. Kelly didn't realise it was Janet's birthday, but what great timing it was for her to send some very sweet paintings she had done of Janet, in icon-style!

Thanks Kelly! (The painting is posted above, by kind permission, and you can link to Kelly Pretty's myspace profile here and a gallery of her other work here.)

It's knowing that Janet's readers are responding to her work, and that new readers are discovering what an amazing writer she was, that makes my job worthwhile.
Posted by Pamela Gordon