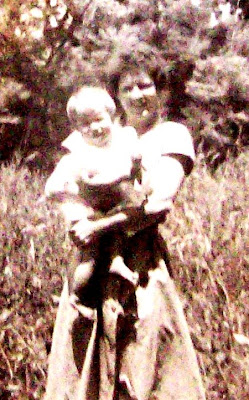 "Janet with Pamela" Northcote, 1955
A moment in time captured. Blurry. But real. I won't try to wax lyrical about memory, because other people have done that far better than I ever could. And anyway, I don't remember this moment. I do know that I was close to my aunt for my whole life, and when I'm asked when my relationship with her began, I can't say exactly. She spent many years of my childhood living overseas, and I didn't see her again until I was 9 years old. During that time she and I used to write to each other, and she often sent me gifts, including some seminal books that deeply affected me - such as The Little Prince, and an anthology of work by Eleanor Farjeon.

This photo was taken when I was around a year old, and Janet was 30-ish. She lived in Auckland for about 15 months, mostly in an old hut at the back of Frank Sargeson's place. During that time she wrote the New Zealand classic novel Owls Do Cry. It was here that she established a regular writing routine and started to build up social networks among the literary community. And at the end of every week she would walk from Takapuna around the harbour to Northcote where my parents lived, and stay the weekend with our family. My father was a travelling salesman, and was away a lot, and my mother never really coped well with her three children so Janet used to help out, and would often babysit. 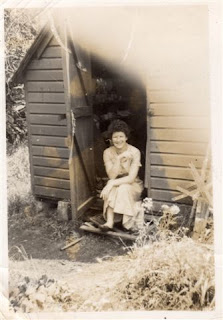 And here she is, around the same time, courtesy of another imperfect snapshot, at the door of Frank's army hut. Looking very cheerful. What a liberation it was for her to meet a community of people who took art and writing seriously. She was forever grateful to Frank for affirming the worth of life as a fulltime writer, and for coaching her in some of the writerly habits she adopted then and stuck to for the rest of her life. (Rising early, keeping to oneself for the first part of the day so as not to interfere with the imagination, writing in the morning, and saving the afternoon for chores and the evening for socialising.)

For the first time in her life, she was accepted as a writer. (Her desire to write had previously, disastrously for her, been mistaken a a symptom of a delusional disorder!)

It was a traumatic and exciting year-and-a-half for Janet. As well as writing Owls Do Cry and having it accepted immediately for publication (occasioning the beginning of some unbridled envy from her mentor, who had been suffering a dry spell, and who preferred to outshine his protegees), she expanded her social networks, including meeting Elizabeth (known as Peter) Dawson for the first time. Janet stayed with Peter at Mt Maunganui; they hit it off instantly, and became lifelong close friends. (Peter later lived in Norfolk and Janet visited her often when she too lived in England. When Peter died in 1986 she left her cottage to Janet.)

But back to 1955 on the North Shore of Auckland. That was also the year Janet Frame's mother died. It's good to keep this fact in mind when evaluating the legend that has since arisen about the time(s) she locked herself away in her hut and refused to come out. Both her grief and her shyness have been pathologised and exaggerated in some of the myths that have been repeated and embroidered over the years since that brief era.

It also pays to remember that before Janet Frame met Frank, she was already a published author who had received the national literary prize for her first book. (Another myth is that Frank "taught" her to write!) He had sought her out and invited her join his circle, because she was a rising star to watch.

And watch her, while she lived out the back of Frank's, they all did, judging by some of the the anecdotes. Some of the hangers-on, anyway, apparently watched her like a hawk. Every tear, every angry riposte, or hint of uncertainty, was interpreted as a sign of "mental instability" and in the retelling of reminscences, the image of "the girl in Frank's garden" has, according to some of the 'eyewitness' accounts, been frozen in time as more of a caricature than a fully shaded portrait of the woman who stayed there for not much more than a year, over half a century ago, at a time of dramatic transition.

Posted by Pamela Gordon at 5:11 PM