I first heard it from Elizabeth Knox, the scintillating Wellington novelist, as I was borne towards her on a heaving wave of glitterati at the impossibly loud and crowded gala opening for the 2007 Auckland Writers and Readers Week. I had sighted Elizabeth and had set my sail in her direction, clutching a festival gift bag full of publishing empire goodies in one hand and a glass of wine in the other.

"Here comes the Frame police," she said (or so I thought), and she introduced me to some people I was already acquainted with in Blogland, but had never met in the flesh. Elizabeth was in a jocular mood, and I chose to take the 'Frame police' soubriquet as a teasing compliment. Frameland is a desirable property, and necessary protection is sometimes called for. I knew Elizabeth would be aware of that, as she has a valuable body of work of her own to care for.

The Frame police. We occasionally say it ourselves now, facetiously, but of course it has a gritty grain of truth. The Estate wouldn't be doing its job properly if it allowed free reign to everyone who wanted a piece of Janet Frame. Frame worked hard to preserve her autonomy and her integrity and she is entitled to have her work and her good name defended against exploitation for personal or commercial gain.

Rarely, the odd person with an ambition to use Frame for some particular scheme, doesn't take kindly to having their plans frustrated. I have had to learn not to take their resentment personally.

But I really prefer to think of myself, in my role of literary executor, as a gardener rather than a guard. I think of tending a wonderful old magical walled garden, with stately trees and grassed avenues, mossy sundial, topiaried hedge plants, wild overgrown parts, a hothouse for sensitive plants, with a lush heady jungle and a waterlily goldfish pond, vegetable plots and flower borders, a potting shed with musty rich mix, and supplies of seeds and bulbs, with many surprises in store... that analogy really works for me.

I'd much rather mulch the borders than patrol them. 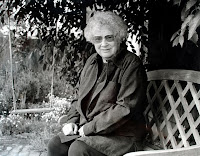 Janet Frame in her garden at St Clair, Dunedin
(Photo by Reg Graham)
Posted by Pamela Gordon at 8:46 PM

I can't claim credit for that one. I only introduced you to someone who was saying something about "the Frame police". I spotted you heading our way and said, to them, "Is this one of the Frame police?"
Elizabeth

Thanks for the clarification Elizabeth. I've altered the post slightly as a consequence.

Actually Janet had already privately prefigured the concept years before, after she appointed me and Denis as her executors. She bought us a joke policeman's helmet! I have photos somewhere of all three of us wearing it in turn.