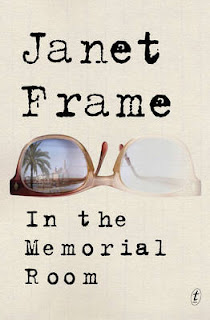 'Such a treat - one that everyone just needs to run out and pick up straight away!'

'It's absolutely fantastic. I can't begin to rave about it enough.'

'There's so much in it, even though it's only a short novel.'

And what did Sonja de Freiz think of Janet Frame's stunning epilogue to the In the Memorial Room that has confused one or two reviewers? The epilogue has been referred to in such polarising terms as 'a tour de force' on the one hand and 'bizarre' on the other. Certainly most reviewers have appreciated the poetic epilogue that soars off into the kind of platitudes and formal expressions that one finds in a language phrase book, but not everybody 'gets' it.  De Freiz says:

'Right at the end, she has taken an incredible risk ... the book ends, and she moves into almost what another reviewer has described as "beat poetry" ... it's brilliant, absolutely brilliant.'
Posted by Pamela Gordon