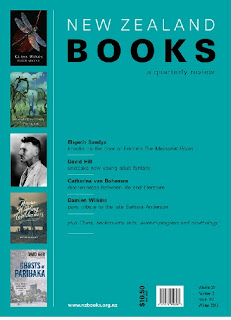 A Wellington reviewer has freshly diagnosed Janet Frame as insane, based on the evidence offered by the acclaimed author’s posthumously published novel In the Memorial Room.
Writing in the Wellington-based journal New Zealand Books (Winter 2013), Elspeth Sandys refers to Frame’s protagonist Harry Gill as ‘Harry/Janet’, or even simply as ‘Janet’. Sandys has decided that Harry's voice ‘seems so close to what we identify as the “voice” of Janet Frame’; ‘this is Janet telling us about her months as the Mansfield Fellow in Menton’, insists Sandys.

‘Harry/Janet’ who Sandys also conflates variously with ‘Frame’ and ‘the author’, is described within the confines of this lengthy review as initially suffering from a ‘nervous sensibility’ but ‘succumbing later to the temptations of paranoia’, progressing to ‘the increasing paranoia of the closing sections’ leading to ‘pages of what might almost be described as “automatic writing”, closely followed by a stream of consciousness display’.

‘No sense can be made of this last burst of writing’ and Harry/Janet/the author is ‘in a state of breakdown’ concludes Sandys.

Sandys regards various passages in the novel as ‘difficult and tortuous, written by an author struggling to express complex thought in words that refuse to stay moored to specific meaning.’


This review is a gift, in that the next time that the question is asked ‘why did Janet Frame not publish this brilliantly witty and clever novel in her own lifetime?’, we can offer an important new reason: Frame possibly suspected that someone in New Zealand might misconstrue aspects of this novel as evidence that Frame herself was, after all, quite mad. And it appears that if this were true, Frame wasn't being 'paranoid' at all, because Sandys has provided the example of the New Zealand reviewer who is unable to distinguish between author and fictional character.
This new revelation can be added to the list of other speculations that commentators have posited as to why Frame suppressed In the Memorial Room:
Sandys is unique amongst all the other reviewers of In the Memorial Room, in wondering:  'why didn't she destroy it?'
Of course it’s not the first time that Janet Frame has been pseudo-diagnosed with a mental illness or disorder based on an assumption that her writing is more symptom than craft. It is extraordinary that this can still happen in 2013 and does show the influence of the cultural baggage carried over from the past, not to mention, perhaps, a defensiveness about who exactly it was that Frame was lampooning.
Posted by Pamela Gordon

Sounds like an unbelievably bad reading. Pedestrian and unimaginative. Did the reviewer completely miss modernism, and postmodernism? And does she lack a sense of humour? Perhaps.