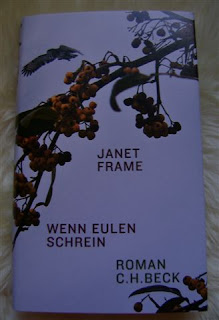 A parcel of attractive hardback books, (shrink-wrapped in plastic) arrived in the Janet Frame Literary Trust mailbox last week.  These 'author' copies were rather late in arriving and I was eager to see them. The cover jacket of the newest edition of WENN EULEN SCHREIN is lovely, featuring an owl flying over a berry-laden bough. This updated translation of OWLS DO CRY  has been giving rise to a bit of a buzz in Germany, following the very positive reception for Dem Sommer Entgegen (Towards Another Summer), which has been recently re-released by the publisher CH Beck in a paperback edition.

For some response to this updated German edition see: