Keeper of the Frame 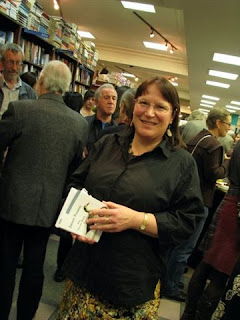 In Melbourne to celebrate the Australian launch of THE GOOSE BATH
(Wilkins Farago 2008) Photo: Andrew Wilkins

A curriculum vitae
Pamela Gordon was named as literary executor by her aunt Janet Frame. In 1999 Janet Frame also appointed Pamela as one of the founding trustees of the Janet Frame Literary Trust. The JFLT owns and administers Janet Frame’s copyright and when funds permit, gives grants to established New Zealand writers. 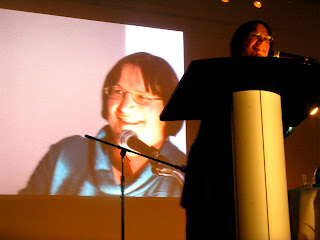 Reading Janet Frame's poetry New York 2012
Photo: Christine White
Pamela holds a BA (Hons) (First Class) in Linguistics from the University of Otago. Her innovative academic research was being published and cited while she was still an undergraduate. She was awarded a postgraduate scholarship and undertook PhD research in Anthropological Linguistics for five years while working as a Teaching Fellow in Linguistics. (Her thesis, an analysis of the use of simplified registers to communicate social stratification, remains unfinished.) In 2002 the Head of Linguistics at Otago University Dr Jae Jung Song stated in an official letter of reference that Pamela “was one of the brightest students I have ever taught… Pamela is also an accomplished teacher… her work as a lecturer and a tutor involved carrying out administrative duties relating to class lists and internal assessment… I recommend her in the strongest terms and without any hesitation”. In the same year, the Head of the English Department at Otago, Associate Professor Chris Ackerley also commended her work in a reference letter, describing Pamela as “a good teacher and a valued colleague”, citing her ‘expertise’, her ‘competence’, ‘friendliness’, ‘experience’, and ‘empathy with students from diverse linguistic backgrounds’. She has tutored and lectured in Linguistics, Communication Studies, English for Academic Purposes, English as a Second Language, and has also written and taught tertiary level courses in science communication, student learning and writing skills.
Pamela has also worked in public and university libraries and as an administrative assistant. Earlier she obtained a teaching qualification in religious studies. She has raised a daughter and a son, and was also an active member of community groups promoting the rights of people with intellectual disabilities (autism in particular). Pamela occasionally performs her own poetry in public and her poems have appeared in a range of literary magazines and anthologies.
As well as managing the Janet Frame estate since Frame’s death in 2004 Pamela Gordon has collaborated on the production of seven posthumously published titles as well as overseeing new editions of Frame's backlist with a focus on eradicating some historical typesetting errors. She has done several public readings of Frame’s work, given talks on Frame at numerous venues, appeared on the stage at three literary festivals, granted many NZ and international media interviews and participated on literary award judging panels. Her generous cooperation with authors, editors, translators and academic researchers has been warmly noted in the acknowledgments section of many a book and thesis. 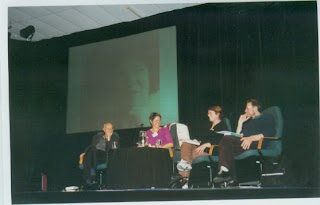 Pamela Gordon has co-edited the following posthumous publications of Janet Frame's unpublished and uncollected writings:
The Goose Bath (poems)
Storms Will Tell (selected poems)
Towards Another Summer (novel)
Prizes (aka The Daylight and the Dust) (selected short stories)
Dear Charles, Dear Janet: Frame & Brasch in Correspondence (letters)
Janet Frame in Her Own Words (non-fiction)
Gorse is not People (new and uncollected stories) 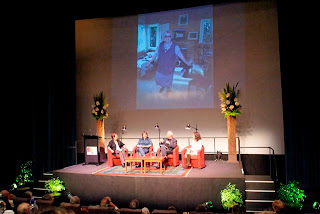