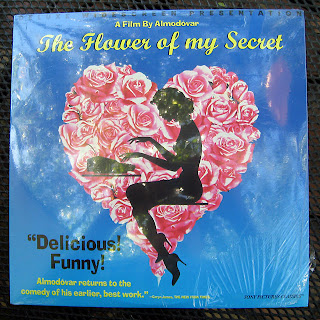 It's always heartwarming to learn how many people from all around the world and from many walks of life have been inspired by Janet Frame's incredible but true story of survival and success. Her escape from the abuses of the provincial psychiatric institution that had misdiagnosed her, was a combination of her own strength of character and her determination to pursue her writing vocation no matter the trouble it got her into, with a touch of blind luck and even the gift of divine intervention courtesy of her guardian "angel".
Janet Frame's transformation into literary superstar was of course the result of no one magical event: as they say, it's amazing how much work over how many years goes into becoming an "overnight sensation".
It seems that the magnificent Spanish film maker Pedro Almodóvar is one of Janet Frame's many fans; according to a recent report in the Observer he recommended Janet Frame's autobiographies to his "new leading lady" Elena Anaya.
A previous Almodóvar leading lady was shown in one of his earlier films The Flower of my Secret to be a fan of Janet Frame's writing, along with the likes of Jean Rhys, Virginia Woolf, and Dorothy Parker. Almodóvar says of the women writers his character admires: "All these women are considered intellectuals, but what unites them most of all is the emotion in their work. They awaken feelings like a bolero, that Cuban feeling which endows the dancer of the bolero with such importance. For Leo [a former romance novelist, protagonist of The Flower of the Dance] it's the same. She is as moved reading a book by a woman as she is listening to a bolero. This is the subject of the essay she's writing - 'Pain and Life'. If she changes the tenor of her novels, her aim is not a greater intellectualism but a greater authenticity." (From Almodóvar on Almodóvar.)
Posted by Pamela Gordon at 12:49 PM