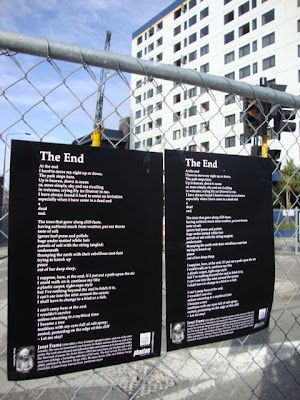 Jim Wilson of Phantom Billstickers did a Janet Frame poetry poster run in Christchurch yesterday to commemorate Janet Frame's birthday. He took this photo of a couple of the Janet Frame posters in front of an abandoned hotel in the part of the city devastated in the past year by a series of disastrous earthquakes. Here is the poem on the poster, and in the context of the Christchurch catastrophe - so many lost lives and so much lost heritage - it's very suitable:
THE END
At the end

I have to move my sight up or down.
The path stops here.
Up is heaven, down is ocean
or, more simply, sky and sea rivaling
in welcome, crying Fly (or Drown) in me.
I have always found it hard to resist an invitation
especially when I have come to a dead end
a
dead
end.

The trees that grow along cliff-faces,
having suffered much from weather, put out thorns
taste of salt
ignore leaf-perm and polish:
hags under matted white hair
parcels of salt with the string tangled;
underneath
thumping the earth with their rebellious root-foot
trying to knock up
peace
out of her deep sleep.

I suppose, here, at the end, if I put out a path upon the air
I could walk on it, continue my life;
a plastic carpet, tight-rope style
but I’ve nothing beyond the end to hitch it to,
I can’t see into the mist across the ocean;
I shall have to change to a bird or a fish.

I can’t camp here at the end.
I wouldn’t survive
unless returning to a mythical time

I became a tree
toothless with my eyes full of salt spray;
rooted, protesting on the edge of this cliff
- Let me stay!


(From The Goose Bath)
Posted by Pamela Gordon