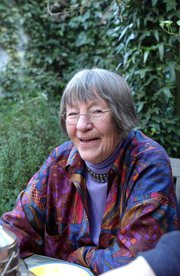 The marvellous Chris Cole Catley was farewelled in Auckland today. She was a prominent New Zealander having contributed to the good of our society in so many ways, and she'll be sadly missed. She was a member of Frank Sargeson's 'inner circle' and as such she and Janet Frame knew each other quite well. Chris was also a very close friend of Michael King, who wrote the biographies of both Frank Sargeson and Janet Frame.
Chris has a quite astonishing list of achievements including being responsible for the renaming of the fruit known as a 'Kiwi' around the world! She was - among other things - a feminist, a Labour party activist, a journalist, an educator, a founder, an innovator, a lterary benefactor, a publisher, an author - and there's no doubt her tremendous energy and good nature charmed and overcame most of the obstacles she encountered in her drive to make the world a better place. Being such a lovely, fun-loving person, she'll be deeply missed by her family and friends and colleagues. She certainly has made the world a better place in so many ways and her legacy won't be forgotten.
I was privileged to know Chris and to cooperate with her on some literary and charitable projects and she was always a delight to work with and very supportive of my role as guardian of Janet Frame's estate.
One of the good guys. Farewell Chris, and may you rest in peace.
Posted by Pamela Gordon at 5:53 PM