"speaking for the bodies and minds locked up" 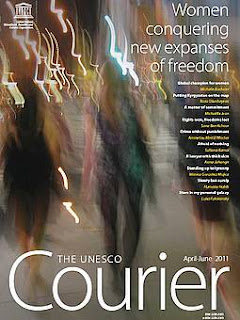 The UNESCO Courier April - June 2011
Women conquering new expanses of freedom
The current issue of the UNESCO Courier celebrates exceptional women speaking out against tyranny, fighting modern forms of slavery and breaking down social barriers that restrict women's freedom.
It's entirely appropriate that one of the role models held up in this issue as a "star in the galaxy" of women who fought personal and institutional oppression, and by her courage and determination overcame all odds in order to achieve international success, is Janet Frame, whose photograph appears on page 45, and who features in an article by Argentinian author Luisa Futoransky. Futoransky's heartfelt tribute to the New Zealand novelist and poet is a great example of the tendency of the facts about Janet Frame's real life to become an unassailable mythical narrative, but while there may be a few inaccuracies in her representation of Frame's life story, her admiration for Frame's courage and passion, and for her resistance to the attempt to silence her, is not misplaced:

"her forte was to scrutinise everything fearlessly."
Posted by Pamela Gordon