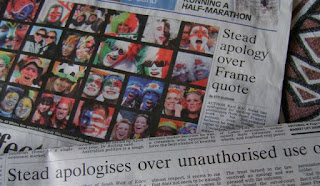 "C K Stead, author of South-West of Eden, and its publisher, Auckland University Press, regret quoting from the work of Janet Frame without permission and apologise to the Janet Frame Literary Trust for doing so."

The apology was also published in the NZ Listener as a public notice.

CK Stead selectively quoted from a Janet Frame letter so that the meaning of the letter was seriously misrepresented.

C K Stead has included an unpublished poem by Janet Frame, and other works by her, and quotes from her personal correspondence, all without permission, in his recent memoir South-West of Eden (2010). Stead also selectively quotes from a Janet Frame letter so that the meaning of the letter is seriously misrepresented.

Stead has apologised for using Frame’s work without permission after her estate took legal proceedings to seek an injunction against him and his publisher, Auckland University Press. He also has agreed to exclude the unpublished poem from any future edition, and either restore a missing part of a sentence to the extract from the letter, or else exclude the letter entirely.

These are the main facts of the matter, but underlying them are the issues of motives and effects. Why does Stead use Frame’s work in this way, and how does his use of her work enhance his memoir?

Stead uses two of Frame’s poems as a basis on which to make judgments about her, but he then denies the poems are unequivocally hers.

A memoir by its nature is emotional writing, an author having their say about their life and times, but nevertheless the reader expects honesty.

Stead in his portrait of Frame, which is a major aspect of the last section of the memoir, uses all his rhetorical skills to create an atmosphere that will support his summing up of Frame as someone “who rejected the whole human order”, and whose work was “structureless, directionless”, which “offered not hope but a black hole”. (South-West of Eden, 2010).

The two Frame poems that Stead uses in order to carry out his ‘analysis’ of Frame are exceedingly minor works – one poem Frame chose never to publish and the other she later withdrew from publication (she removed it from subsequent editions of her poetry collection The Pocket Mirror). Where is the academic rigour in this use by Stead of trivial Frame works to represent what he claims are her failings as a person and a writer? Surely if he wanted to give a genuine estimation of Frame, he would have used work that truly represented her?

But of course this is a memoir and not a critical work, so therefore ‘fair dealing’ for the purposes of criticism or review is not Stead’s intention. He wants to characterise Frame as childlike, nervous, and strange (“there was something intangible”), and interweave these observations with his demeaning comments on the two poems.

The unpublished Janet Frame poem that Stead has published without permission is derived almost word for word from the stream of consciousness prose poetry on the first page of Frame’s novel, Owls Do Cry. Frame, egged on by Frank Sargeson, recast this passage into a ‘hoax’ poem that she sent under the pseudonym ‘Santie Cross’ to a London literary magazine, which turned it down. Frame then chose never to publish the poem in that form. After her death her estate refused permission for the display of a manuscript of the poem in an exhibition curated by Jenny Bornholdt and Greg O’Brien, at the Turnbull Library in Wellington. Frame and her estate have always considered this ‘poem’ a curiosity piece, unpublishable unless explained within the context of its genesis.

The poem is solely by Frame. She describes the story behind it in her autobiography (chapter 23 of the second volume, An Angel at My Table), as does Michael King in his biography of Frame (chapter 8). In neither book, tellingly, did Frame allow the poem to be published, either whole or in part.

Not only does Stead deny that his publication of this poem is an infringement of Janet Frame’s copyright, he has the effrontery to deny that the poem is Frame’s. On page 316 of his memoir, Stead claims that it was Sargeson who composed the poem by extracting lines from the opening pages (“shown to him” by Frame) of Owls Do Cry and typing them as a poem himself. The law firm representing Auckland University Press later reiterated this claim in a letter to the Frame estate’s lawyer, Rick Shera, on 21 May 2010.

Stead found a copy of this poem at the Hocken Library in Dunedin pinned to a letter Sargeson had written to Charles Brasch. There is also a manuscript copy in Frame’s own papers, and there is a third typed copy (signed "Janet") in the Frank Sargeson papers at the Turnbull Library.

In reproducing the poem, Stead has introduced a typographical error. He has added the word 'the' to the line “it said to plant”, which he renders as “it said to the plant” thereby changing the word 'plant' from a verb to a noun and therefore serving to reinforce his allegation that the poem has “no structure, no shape”. Stead goes on to make the amazing leap from his dismissive judgment of the poem to the intellectually untenable conclusion that this off-the-cuff ‘hoax’ of a poem is a fair representation of Frame’s poetry, and that like this poem her work as a whole has “no structure, no shape”:

“It had no structure, no shape, but it was full of striking imagery and flashes of brilliance. That is what I thought; and I suppose, it is almost true to say, that is what I would go on thinking about the work of Janet Frame.” [page 315 of South-West of Eden]

But wait! We have already heard Stead’s claim that this poem is not the work of Janet Frame. Therefore, how can it represent her?

To develop his thesis in regard to both Frame and her work, Stead then goes on to quote, without permission, from a Frame poem called 'Our Town'. This poem is composed of lines from poems by other poets, and is the result of a literary game similar to one played at Sargeson’s house. The poem was accidentally included in Frame’s only collection of poems published in her lifetime, The Pocket Mirror (1967), and in 1992 she withdrew it from subsequent editions because in itself the poem infringed the copyright of other authors. As of 2010 the poem 'Our Town' that Stead claims to be subject to 'fair dealing' "for the purposes of criticism or review" has been thus withdrawn from circulation and removed from Frame's canon by her own hand, for nearly 20 years.

'Our Town' is solely by Janet Frame. Stead acknowledges this in his 2002 book Kin of Place on page 275:

“she has taken [the first lines of poems] from what would have been, at a date prior to 1967, a modern anthology. The lines are managed, nudged, manoeuvred towards a recognisable Janet Frame statement about ‘our town’,”

But now in 2010, Stead amazingly claims that he, his wife and Sargeson had a hand in composing the poem. Again we see Stead’s attempt to blur ownership. And again we see the curious double-think, the contradiction, that if this is not unequivocally a Frame work then how can it represent Frame?

Stead quotes ten lines from 'Our Town' (he does not reproduce an entire passage but cobbles together several excerpts) and inserts this as evidence into his evolving pattern of innuendo, which climaxes with his observation that Frame was someone:

“who rejected the whole human order, and whose work, structureless, directionless, brilliant, with flashes of genius, offered not hope but a black hole.” [page 318 of South-West of Eden]

Saying that Janet Frame “rejected the whole human order” is absurd, an insult to her memory, her family, her friends, to all who knew her and loved her, an insult to truth. Frame’s work is not “structureless, directionless”, as the countless scholarly studies of her work affirm, not to mention her growing international readership. The only black hole is that of envy and revenge, the black hole of being the last man standing, attempting the last word:

“when you’re writing about such a long time ago there is in a way the advantage that so many people are dead and can’t quarrel with your view” [Stead speaking to Chris Laidlaw on his “Sunday Morning” programme on Radio New Zealand National on Sunday May 16, 2010]

Just a few pages from the end of his memoir, Stead performs his last act of turning Frame’s own work against her. Stead, by his use of selective quotes from a letter Frame wrote to him creates the impression that she confirmed his claim that her story 'The Triumph of Poetry' was “targeted” at him.

Stead selectively quotes from the letter, leaving out vital parts so that he represents Frame as saying the opposite of what she is really saying.

This is the final sentence from Stead’s extraction from the letter:

But I want you and Kay to understand that I’ve never felt any malice towards you.

Stead actually ends his extraction midway through a sentence (and in the process changes a comma into a full-stop). He leaves out Frame’s categorical statement that the story is not about Stead and his wife. This is what Frame wrote:

But I want you and Kay to understand that I’ve never felt any malice towards you, that the poet of the story is a certain elderly Scotsman who is now living in Dunedin, dividing his time between his garden and Shakespeare.

Not only does Stead use Frame’s work without permission, but, Janet Frame’s estate contends, also infringes Frame’s moral right (that continues for twenty years after death) not to have a statement falsely attributed to her.

Janet Frame’s estate initiated legal proceedings against Stead and his publisher, who have agreed to apologise for using Frame’s work without permission. They have also agreed to exclude the unpublished poem from any further edition. Also, if Stead wishes to continue quoting from the letter, he has agreed to include the omitted clause.