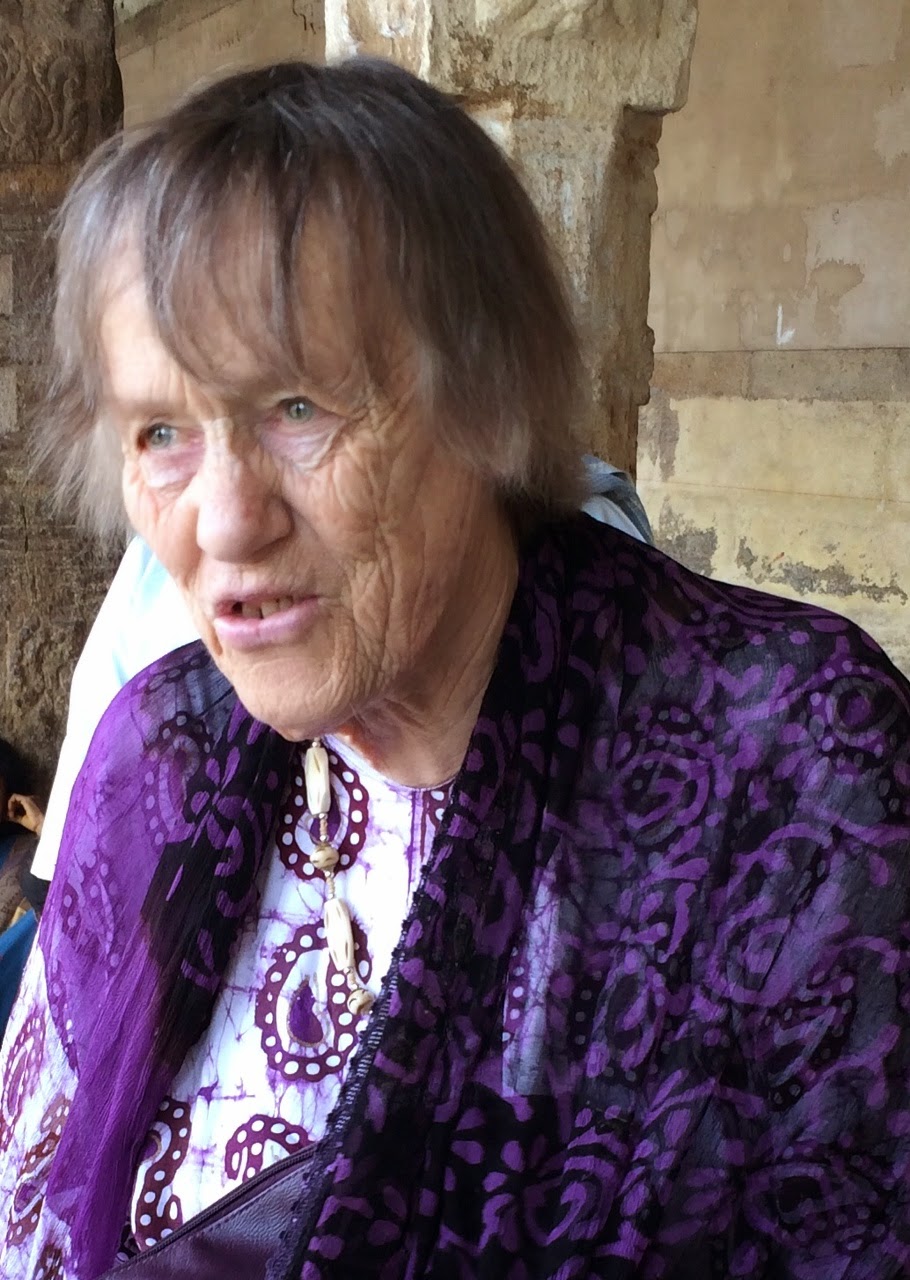 Jean Watson
New Zealand author and humanitarian
1933 ~ 2014
There is another sad death to record among the friends and contemporaries of Janet Frame. Jean Watson died suddenly on the 29th of December 2014. She was a wonderful person who received well-deserved public accolades in the last year of her life with the release of a fine documentary on her life and especially on her work in South India.
The film is called Aunty and the Star People and I highly recommend it for an excellent insight into a person of singular vision and compassion.
Janet Frame and Jean Watson were not much more than acquaintances, although they both had huge respect for each other's work, and fondness for each other. They shared a very close mutual friend, Jacquie Baxter, so the three all did meet up from time to time and shared a few outings and escapades, and through Jacquie they kept up with each other's news and gossip and publishing milestones. I remember that Janet spoke admiringly of Jean's work in India, her spirituality, and her writing.
I had met Jean Watson myself a few times over the years and was very glad to sit down and catch up with her last year in a Christchurch pub when we both attended the  WORD Christchurch Writers and Readers Festival. She was in excellent form and had delivered a most entertaining and enlightening performance on stage in conversation with film maker Gerard Smyth at the festival.
Jean had a story to tell of the first time she had met Janet Frame. It was in 1955 when Janet was living with Frank Sargeson at Takapuna, and Jean had gone to visit Frank Sargeson to ask him for a favour - she needed him to write her a reference for University study. Frank wasn't home when Jean called, but Janet Frame was, and they got on like a house on fire. Janet was very welcoming and hospitable, and even wrote Jean a reference herself. Didn't seem anything wrong with her at all, said Jean, despite all the dire warnings that visitors to Frank's place were always prepped with, about not 'startling' or 'cornering' Janet who allegedly was as easily scared off as a feral cat.
(This anecdote is very much in line with one told by other people who were whipped into such a high state of anxiety before meeting Janet - the alleged 'madwoman' or 'recluse' - that they were very surprised to find her to be warm, sociable, articulate and witty. Some however, could not see past their own preconceptions...)
I was reminded last year of what a wicked sense of humour Jean had. That was a feature Janet and Jacquie shared too, that made them all a joy to be around, and there was always much laughter when they were together.
My sympathy goes to Jean's family and to her friends and the communities who loved her.
Here is a link to the Radio NZ report on her death.
The Karunai Illam trust set up by Jean Watson in South India.
Aunty and the Star People (film promo)
Film review
Aunty and the Star People (Facebook Page)
"There are people who will always look in lighted windows and want to be there behind the safety of drawn blinds, and when they are there they’ll suddenly not want it or something will bugger it for them and they will feel the road beneath their feet again..."
(from Stand in the Rain by Jean Watson)
Posted by Pamela Gordon at 7:52 PM