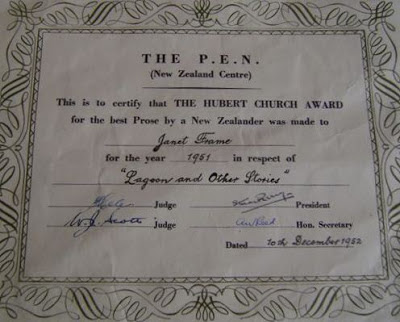 The Hubert Church Award for the best Prose by a New Zealander,
awarded to Janet Frame for her first book The Lagoon and Other Stories,
was signed on the 10th of December 1952
(sixty years ago today).
A facsimile of the certificate, issued by P.E.N New Zealand (now the New Zealand Society of Authors or NZSA)  is now on display at Dunedin's newly refurbished Toitū Otago Settlers Museum which opened on the weekend.
2012 marks the 60th anniversary of the publication of Janet Frame's still-feted first book, The Lagoon and Other Stories, most of which had been written six years earlier. Publication had been delayed for five years during which time Frame had struggled to convince New Zealand medical professionals that her ambition to write was not a mere psychotic delusion.

By December 1952 Frame was in a state of despair, back at Seacliff hospital near Dunedin after being released earlier in the year from an Auckland mental hospital after the publication of The Lagoon.

Frame had been particularly dejected, during her journey south, to read the following anonymous review of The Lagoon in the Christchurch Press:


[This volume is] produced with an elegance and care that the stories themselves scarcely deserve. This sort of thing has been done already by Frank Sargeson, and one wearies of his imitators. Nearly all the sketches are impressions of childhood, with little or no real point or narrative interest, written in a style that consists of simple statements endlessly joined by a chain of ‘ands’. There is much use of the pronoun ‘you’, the dialogue is all run together into long paragraphs, and plenty of New Zealand slang and colloquialisms are thrown in to provide local colour. The fact that Janet Frame remembers her childhood with vivid intensity cannot redeem the style which, up to a point, is suitable for evoking material images of the New Zealand scene, but can convey no emotions other than the simplest and the most sentimental.

Brutal reviews such as this had done nothing to convince Frame or medical authorities that she had the future as a writer that she so longed for. Desperate measures seemed to be called for, and Frame was placed on a waiting list for a lobotomy, with her mother signing the permission against her will. Surgery was scheduled for the 26th December 1952. So the timing of the literary award - signed on the 10th December 1952 - was perhaps one of the most felicitous known to literary history.

The Superintendent of Seacliff Hospital, Dr Geoffrey Blake-Palmer, happened to see this notice in the local newspaper, and cancelled the operation: 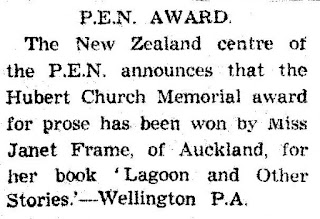 It was Frame's deep gratitude for this and the many other prizes and awards that she won in her lifetime, that motivated her to bequeath her ongoing royalties to the charitable trust she founded, the Janet Frame Literary Trust, with the instruction to use any profits from the responsible management of Frame's copyright to give grants and awards to encourage and support other writers. In the 8 years since her death the Trust has awarded almost $100,000 to individual authors and literary organisations.
Posted by Pamela Gordon