And yet, it moves 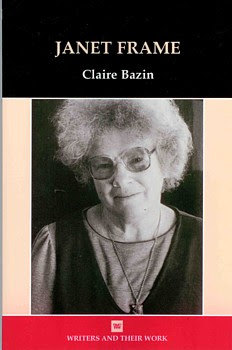 A cropped image from a beautiful portrait of Janet Frame by the great New Zealand photographer Robin Morrison graces the front of this British schoolbook about Janet Frame written by French academic Claire Bazin. A print of the Robin Morrison portrait has been gifted to the New Zealand Portrait Gallery in Wellington by an 'anonymous donor'. The portrait was recently on display in the Gallery in an exhibition called "Makers of Modern New Zealand". There is a snapshot of the uncropped portrait here.

I have found copyright information for the use of this portrait on a website dedicated to Robin Morrison:

The entire collection of Robin Morrison's photography was bequeathed to the Auckland Museum. Archival quality prints are available on request - limited to an edition of three per image.
Enquries to: library@aucklandmuseum.com
Reproduction rights on request. Permission to use: Dinah Morrison: dinahm@ihug.co.nz

As for the text book, as I have noted with some amusement before, it purports to be written from an "autobiographical perspective". Droll as it is, this howler is a signal that much will have been lost in translation from Frame's poetic and allusive English to academic French and back again to academic English. There is a claim made in its blurb that "It is the autobiography and its film version, An Angel at My Table, that won her [Frame] international fame." This disturbingly naive statement appears to have been copied off the Wikipedia article about Frame. The Campion film maybe won Frame international fame in the eyes of the airheads who do not read literary fiction anyway (perhaps because they spend their time obsessively editing Wikipedia articles) but Janet Frame's international reputation as a major novelist and poet had been well established long before she was motivated to write her autobiography, as a little thorough research would have easily established. The highlighting of this startling fallacy rather indicates that Bazin is another of the commentators who approaches Frame's life (and work) through the smokescreen of the Campion film. Bazin has admitted as much, has confessed that she had not read Frame before watching the film 'about' her (not something to boast of, if one claims to be an expert on literature in English, I would have thought!):

"The book seems to depend on the film: most people, myself included, saw the film first and then wanted to
read the book. So in our perception, the book exists ‘retroactively’ and the same could apply to her fiction and poetry."
This admission is a warning that Bazin's 'analysis' is likely to be skewed and inaccurate in many other details as well, given that she had chosen what to think before even approaching the texts. Fascinating though, to observe the blinding power of a preconception.
Frame said in an interview about her autobiography:

"I am always in fictional mode, and autobiography is found fiction. I look at everything from the point of view of fiction, and so it wasn’t a change to be writing autobiography except the autobiography was more restrictive because it was based in fact, and I wanted to make an honest record of my life. But I was still bound by the choice of words and the shaping of the book, and that is similar to when one is writing fiction. I think that in writing there’s no feeling of returning to or leaving a definite form, it’s all in the same country, and within view of one’s imaginative home so to speak, or in the same town. They are different and each has its own interest."

This is one of Frame's clear statements that though for her the project of autobiography and fiction is 'different' she was able to use the same formal techniques in one that she had perfected in the other. But she always stresses the difference between making "an honest record" and writing fiction. The two are completely separate genres for her.

Bazin misreads and misrepresents Frame's own words to make the claim that because Frame has said "autobiography is found fiction" that she has therefore admitted that all of her work is a murky fusion of the two genres, despite the fact that Frame repeatedly railed against this fallacy, including in the same paragraph (quoted above) in which she says "autobiography is found fiction", she adds that "They are different".

It never fails to amaze me that people can ignore the evidence of their senses in favour of a belief that is as fervently held as if it were a religious tenet.
Posted by Pamela Gordon at 2:43 PM