Every day is poetry day for some of us, but how good that there is a day set aside for the nationwide celebration of poetry. Tomorrow the winner of New Zealand's poetry book of the year will be announced, and from the top of the north to the bottom of the south there will be large and small gatherings and readings devoted to the art of poetry. 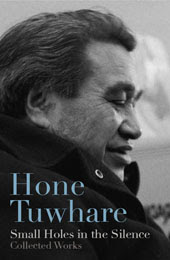 It's fitting this week that the poetry of one of New Zealand's best-loved bards, the late Hone Tuwhare, has been released as Small Holes in the Silence: Collected Works (Godwit 2011). Hone was based in Dunedin for many years and so he and Janet Frame were on kissing and cuddling terms (mind you Hone was on kissing and cuddling terms with a lot of people, he was a charming and outgoing person!)

As she did for her other literary friends and contemporaries, Janet made a point of attending Hone's launches and readings whenever she could. Janet and Hone had both been Burns Fellows at the University of Otago so they met up sometimes at Burns Fellow reunions. She also attended the unveiling of Hone's 'Writers' Walk' plaque in the Octagon just a couple of years before she died.

Last weekend I was browsing through the local newspaper, the Otago Daily Times, and I saw a photo of Hone Tuwhare giving a poetry reading at the Dunedin Public Art Gallery. Hone was standing at a podium in front of an installation of the wonderful work 'Black Phoenix' by another great New Zealander, the artist Ralph Hotere. The photo was taken from behind the audience, and I knew whose white frizzy mop of hair to look for, because I remembered that Janet Frame had attended that reading. Sure enough there she is, captured from the back, listening intently. Here's a link to the newspaper article about Ralph Hotere (who celebrates his 80th birthday this year) and if you were to click on the photograph of the poetry reading at Dunedin's Wordstruck! festival that took place in May 2000, you might be able to recognise the unobtrusive elderly lady merging into the crowd. Any strangers that recognised her respected her right to privacy; in the context, she was among friends and lovers of poetry and art. (Anyone who didn't recognise Janet Frame in public, may well still be under the impression that the "famous recluse" never left her house.)
Posted by Pamela Gordon