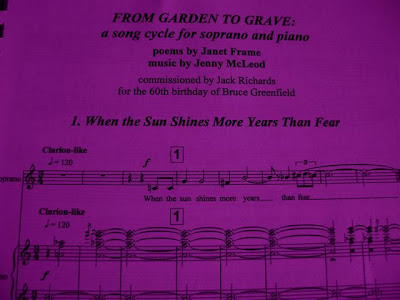 Former Music Professor Jenny McLeod's third song cycle based on Janet Frame poems is to have its first public performance at a benefit recital on July 11th 2010, at Victoria University of Wellington, New Zealand.

The work is called FROM GARDEN TO GRAVE: a song cycle for soprano and piano and includes settings of eight of Janet Frame's poems from her two poetry collections The Pocket Mirror and The Goose Bath. The title is taken from a line in the poem 'Freesias': "I praise their courage in bearing their essence from garden to grave".
Soprano Margaret Medlyn and pianist Bruce Greenfield will perform the song cycle, which had its first performance at a private party in honour of Greenfield's 60th birthday in 2008.
All proceeds from the benefit will go towards a postgraduate scholarship at the Wellington School of Music. Further details here:
http://www.voxy.co.nz/national/benefit-recital-premiere-two-new-zealand-works/5/52479

McLeod's two other song cycles based on Frame poems, The Poet (2008) and Peaks of Cloud (2010) both premiered at Wellington's International Festival of the Arts.
Janet Frame's poetry has for several decades now been inspiring and enhancing the work of many prominent composers and also innumerable music students.
There have already been dozens of musical settings written for poems from the posthumous volume The Goose Bath (published in 2006) and the Frame estate is kept very busy negotiating permissions and conditions for the various projects proposed by composers keen to exploit the wide range of original expression, piercing insight and linguistic artistry found in Janet Frame's poetry.
Janet Frame was a music lover and always enjoyed the collaborations between her work and the work of skilled composers.
Posted by Pamela Gordon