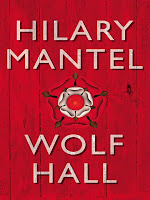 Delighted to see that Hilary Mantel's novel Wolf Hall, which has attracted much praise from the critics, has been shortlisted for the 2009 Man Booker Prize for Fiction.

Here at the Janet Frame estate we have a soft spot for Hilary Mantel, who has written a superb introduction to the 2009 Virago paperback edition of Janet Frame's classic bestselling novel FACES IN THE WATER.

Mantel's introduction to Faces in the Water is one of the most perceptive pieces of writing about Janet Frame's work that I have ever read. The essay is incisive, well-researched, and beautifully, at times lyrically, written.

And of course Mantel can see right through the attempts to pathologise Frame the author, in her lifetime and beyond. Here's one of my favourite passages from the introduction:

Despite the other things she could do, distinctive and remarkable things, Janet Frame remains subject to categorisation. She was put into the mad category, saved at the last moment for the artist category, and is sometimes put back into the mad category by people keen on classifications and unable to explain her genius except by defining it as abnormality. An arid reductionism still haunts her. In 2007 a paper in the New Zealand Medical Journal suggested that she had an autistic spectrum disorder. It is time to subdue the urge to pathologise, and see Frame as the highly conscious artist that she was.