Poetry on the occasion of Janet Frame’s birthday 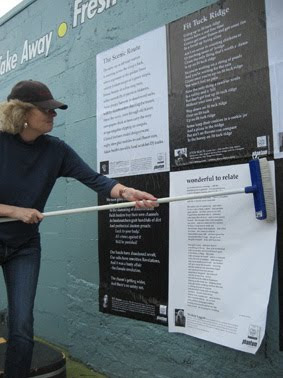 “Poetry on the occasion of Janet Frame’s birthday”

There’ll be refreshments and entry is free.

Phantom Billstickers will launch new poetry posters in their six-month campaign. The fresh posters this month include a Janet Frame poem poster, and posters featuring poems by the 2008 and 2009 Janet Frame Poetry Award winners.
Readings will be given by Canterbury poets.
The executors of the Janet Frame estate will also be present and will announce the recipients of the 2009 Janet Frame Awards for Poetry and Fiction.
Two awards of $10,000 each will be given in 2009 to mark Janet Frame's 85th birthday, making a grand total of $85,000 that has been given to benefit New Zealand writers by Janet Frame's estate from an endowment fund the late author set up for that purpose in 1999.
Posted by Pamela Gordon