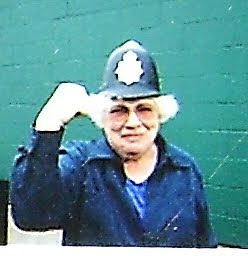 Janet Frame (aka Dr Janet Clutha) kidding around in a police helmet she bought at the party goods department of her favourite Stationery Warehouse.
That's a very typical smile on her face.
Her love of mischief will be well known to anyone who has read her work (especially Living in the Maniototo, which I have just reread - it's such a funny novel).
Like many professional writers, Janet was quite partial to stationery, and of course as it was tax deductible she would stock up regularly, especially at the time of the annual income tax return.
I don't know if she put in a claim for the hat, but it still sits in pride of place at the HQ of the Frame Police.
Posted by Pamela Gordon