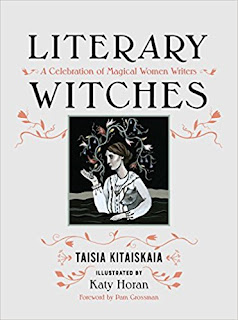 Apparently Janet Frame has been included in a novelty comic/volume entitled:
Literary Witches: A Celebration of Magical Women Writers by Taisia Kitaiskaia - (2017)
The book was previewed for Lithub and for Electric Literature. Three pages are devoted to each author. Unfortunately the Janet Frame section isn't included in either of the excerpts. It looks pretty entertaining. Would have made a great Halloween gift!
Thanks to Google Books I was able to find a snippet of the Janet Frame fantasy-witch: 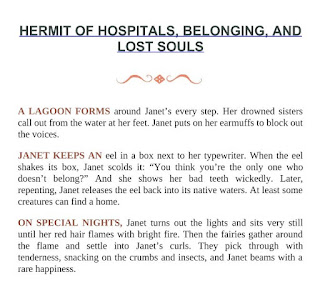 It's quite charming as a tribute I think. I know that Janet would have been a bit annoyed to have been called a hermit, and of hospitals no less, when she left all that behind... but of course her grateful readers continue to associate her with the experiences of her youth that she had written so brilliantly about, and as a wise old witch she would definitely have enjoyed the eel story.

There is an illustration of Janet Frame that is also beguiling on the one hand and wrong on the other - it shows her as fat, with red hair. That never happened! Now in real life Janet was a fire-engine-red-haired slim young woman who boasted as a matter of pride that she didn't have a double chin, while in her later years she was a white-haired stout old crone. So the red hair did not co-exist with the double chin and the abdomen swollen with cancer. But again, despite the simplistic stereotypes of Frame that the artist was fed, the illustration is intriguing, and has a familiar mischief about it. And the eel is for real. Spooky. 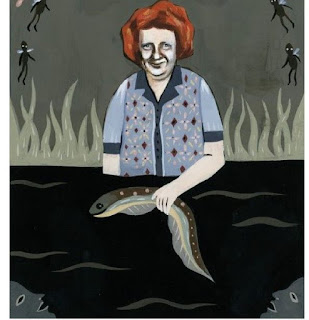 Detail of illustration of Janet Frame as a Witch, by Katy Horan
This isn't the first time Janet Frame has been identified as a witch.
In the New York Times Book Review, August 8, 1965, in a review of Janet Frame's novel The Adaptable Man, Wilfrid Sheed said this:
"The New Zealand authoress Janet Frame is a "witch-novelist" who stirs her plots under a full moon and has various magic powers, including a number-one witch's curse. Her prose style is a series of charms and incantations, passwords repeated in a baleful voice, which hex up the whole landscape, turning the vegetables into people and the people back into vegetables, or worse: into rock..."
This of course derives from the prologue to the The Adaptable Man, the first sentence of which reads:
"A contemporary ingredient in the cauldron world of the witch-novelist is a pilot’s thumb."
The poem 'Daniel' that Janet Frame wrote about her great-nephew Daniel also suggests that Frame was very familiar with the ways of witches: 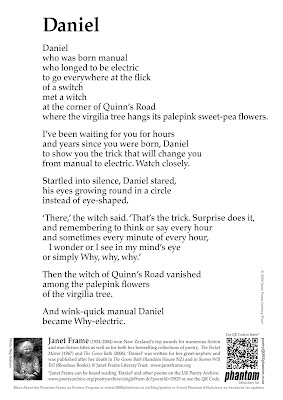 Another Frame poem, 'Cat of Habit' contains the lines:

Feed and sleep and feed
and half-heartedly catch
moths and mice and mostly watch
hourlong for the passing witch
for many, unseen, pass
through the rooms of the house and outside,
under the trees and in the grass. 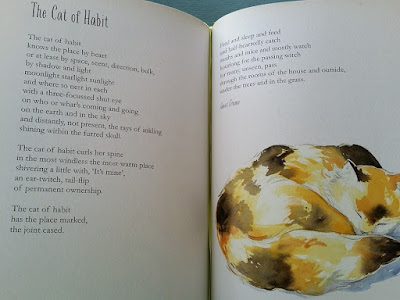 Photo: 'The Cat of Habit' by Janet Frame (first published in The Goose Bath, 2006) was reprinted in A Treasury of New Zealand Poems for Children edited by Paula Green, illustrated by Jenny Cooper (Random House NZ 2015). This wonderful volume is to be reissued later this month by Penguin New Zealand (2017)