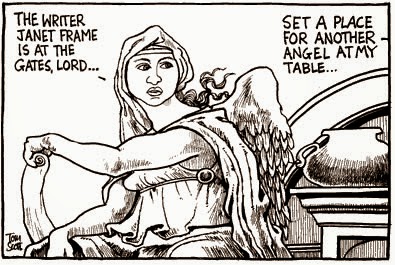 Cartoon © Tom Scott
First published in the Dominion Post 30 January 2004
(reproduced by kind permission)
This week marks the 10th anniversary of Janet Frame's death from leukemia on the 29th of January 2004 at Dunedin Hospital where she had been admitted only a little over 48 hours beforehand.
Until then, for the several months after she had been diagnosed with the terminal illness, my aunt had managed to stay at her own home with my help as companion and caregiver. We had the support of the Otago Hospice, of the district nurses and home help staff provided by the local health board, and the Meals on Wheels service, and also from the wonderful volunteers of the Cancer Society.
Close friends and family also rallied around. Janet was able to bid farewell to a host of her friends and family and colleagues over that time, and as she had lived her life, she approached her end with courage, wisdom, wit, good humour and a sense of adventure. She was strong and lucid and conscious to her very last breath. Only in those last two days when she was admitted to hospital did talking became too difficult for her, but even then she was still able to communicate by mouthing simple but heartfelt expressions such as "thank you".
Her last actual words were spoken early on the 27th January not long after she reached the emergency room at the hospital. The medical staff had indicated that she was approaching the end and that they would admit her to the oncology ward to try to make her as comfortable as possible. She said:
"So this is it, then."
Posted by Pamela Gordon at 9:16 AM

Keep up the awesome work with the website and the JFLT.