It's almost time to announce the Janet Frame Literary Trust Award recipient for 2013, and so it's a good moment to catch up with some former recipients of the Award. Peter Olds was an inaugural recipient in 2005.  His most recent book of poetry is called Under the Dundas Street Bridge. 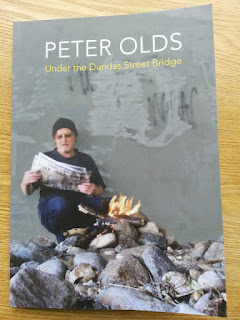 Under the Dundas Street Bridge
Peter Olds
Steele Roberts 2012
There was a fine launch for this new book in Dunedin and a celebratory dinner afterwards, where friends and fans and colleagues were asked to pay their tribute to Peter Olds.and his long career. I gave a short speech which went something like this:

You're a legend, Peter. I'll never forget the first time I discovered your early poetry broadsheets in a campus bookstore at Victoria University. I was only 17 years old and I'd just left home. It was cool, glamorous, edgy stuff. Peter Olds: V-8 poet, disciple of Jack Kerouac, friend of Jim Baxter, Taonga! It's a privilege tonight to celebrate at least forty years of your generous and sensitive gift of words. Thank you, and we wish you many more.