Jane Campion on top of her game 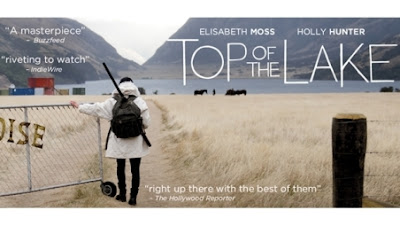 It's Jane Campion's birthday today and she has plenty to celebrate. She is, I hope, enjoying all the well-deserved praise for her compelling new TV mini-series Top of the Lake which has just completed its season here in her native New Zealand. It made riveting and harrowing viewing. The production was beautifully filmed, judged and acted. Pace is a particular strength of a Campion project: she is never in a hurry. There was so much you have come to expect of the classic New Zealand movie: gorgeous but somehow sinister landscape, eccentric characters, gallows humour (literally), rough diamonds, crazy crowd scenes and at least one charismatic psychopath. And more, of course. Top of the Lake is television raised to a work of art and so of course comparisons have been made with Campion's celebrated earlier mini-series, An Angel at my Table, which was a slightly fictionalised adaptation of Janet Frame's three-volume autobiography.

I was very much struck by the resonances between the strong lead character Robin and the earlier eventually triumphant Janet. Both were victimised, misunderstood, marginalised, struggling against brutally patriarchal institutions and individual bullies, and yet with a stubborn persistence to survive and an ability to get back up again after a setback. The message is hope and perseverance. I wasn't the only viewer to notice the similarities between Robin and Janet. In 'Jane Campion's first great miniseries' (Slate), June Thomas lists some of the similarities between the damaged but battling young women lead characters, and suggests that the character of Robin has been influenced by Campion's knowledge of Frame's life:

"It also seems that Campion, who wrote Top of the Lake with Gerard Lee, internalized some of the details of Frame’s life when she set out to create her newest fictional world."

Here's where I disagree. Rather than Jane internalising Janet, and projecting Janet onto Robin, I suggest that Jane is projecting onto Robin the same preoccupations and obsessions that she projected onto Janet in Angel. In an earlier blog post 'How much Jane is there in Campion's Janet?' I discussed this hypothesis and I referred to the work Alistair Fox has done in teasing out the evidence for this creative process in his book Jane Campion: Authorship and Personal Cinema (2011).

However the mysterious process of creating art comes about, from the interweaving of material from the artist's life with the illuminations given by their imagination in the service of the fictional story and in the pursuit of the themes and the tropes and the 'hauntings' (as Frame called it) of the artist, we the reader and the viewer can only marvel to be presented with another masterpiece.
Posted by Pamela Gordon at 11:59 PM