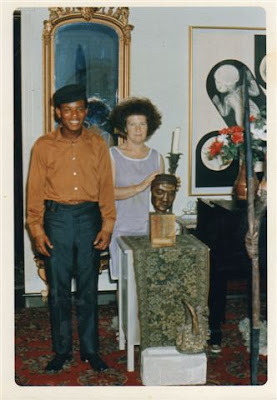 It's no secret that I'm not impressed by the fad for posthumous diagnosis of celebrities.
What is a little less obvious, apparently, is that it is not the particular condition or disorder being touted, that I have any particular objection to. I don't have an irrational dislike of any particular condition. I have a rational distaste for people being misrepresented and labelled based on hearsay, myth and presupposition.
The same people who are quick to say they understand someone as complex and baffling as Janet Frame, and can name her so-called "problem", would be chilled to the bone if they themselves or somebody they loved and knew well should happen to be labelled and placed in a box by someone who had never even met them, and furthermore who had little more than the roughest caricature of facts about them, and had never had access to any reliable empirical evidence concerning them.
Nevertheless, various "researchers" continue to venture where angels fear to tread, and feel quite sure they can sum up, with one "diagnosis" or another, an extremely complicated and multi-faceted woman, who had a dazzling personality.
So, initially, she was misdiagnosed with schizophrenia. That was overturned. She learned eventually not to reveal herself in conservative, conformist or arrogantly authoritarian company, for fear of being thought mad for the brilliance of her conversation. She didn't care for small talk so she often fell silent. She was not mute, and she was not inarticulate when she was in amenable company. And she does make this quite clear, repeatedly, in her autobiography. And there are an army of witnesses who have attested to her sparkling quick-witted communicative abilities. She could certainly be stubborn and uncommunicative when faced with pretension and insincerity, which she could not abide. (Oh and I'm sure the 'inability to abide insincerity' will now be added to the list of her "symptoms" that add up to some pathology or other!)
I'm reminded of the wonderful Sufi/Buddhist/Hindu tale of the blind men and the elephant. And myself just another of the blind men, perhaps.
I did know Janet far too well to agree with anyone who would claim that she was bipolar (or manic depressive), had Asperger Syndrome, suffered from depression, was subject to episodes of fugue, had borderline personality, or high-functioning autism. She had none of those, although she had an astonishing empathy and understanding for people who did. She counted medical doctors and psychiatrists amongst her many friends, and not one of them declared her to have anything wrong other than some minor post-traumatic effects of the abuses she had suffered in New Zealand hospitals.
But I do admit to a soft spot for one of the labels that have been bandied about since her death. That is, that she was a "womb twin survivor".
Janet really had been deeply affected by the knowledge that her foetal twin had not survived. Her biographer Michael King had appreciated her lifelong sense of loss and longing to belong to her own kind, and satisfied himself that in fact she had really been the only survivor of twins, so much that he claimed to have named his biography Wrestling with the Angel in order to suggest the influence on Janet of her sense of being a lone twin.
So here's yet another posthumous label: if you're interested, you can click on the link to read a description of Janet Frame as a "womb twin survivor".

Although in my opinion this portrait is incomplete and unsatisfactory, and is more than a tad fanciful, it does at least have a touch of emotional authenticity about it (she was lonely, at times, in the way gifted children are lonely for their own kind), so I don't find it as offensive as some of the other characterisations.
Posted by Pamela Gordon at 10:42 PM