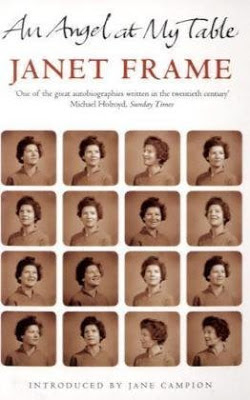 ‘Janet Frame’s luminous words are the more precious because they were snatched from the jaws of the disaster of her early life. It is one of the classics of autobiography.’
~ Hilary Mantel
Posted by Pamela Gordon

I was delighted to hear this on BBC Radio this week. But I did wonder if the actress Lorraine Ashbourne is a New Zealander or not. Do you know? I found her accent off putting and for me it distracted from the otherwise good production. Its hard to believe that they wouldn't choose New Zealander to portray such an important role. I hope I'm wrong.

To the anonymous commenter: The role of Janet Frame is indeed important, and Lorraine Ashbourne was an inspired choice to play her; she has delivered a moving and nuanced portrait of Janet Frame that in my opinion is very faithful to the spirit of Janet Frame's origioriginal text (her 3 volume autobiography AN ANGEL AT MY TABLE). Lorraine Ashbourne is not in fact a New Zealander, but she knows Frame's work well, and that matters more than being able to ape accurately a stereotyped Kiwi accent. I would prefer to hear Frame's single-minded courage, her clear-sighted persistence and ambition and self-directed achievements recounted with her characteristic wry humour and sly wisdom in an accent that slightly misfires rather than have to cringe at a myth-riddled and patronising characterisation of Frame, misrepresenting her as some sort of feral recluse scared of her own shadow, delivered with a perfect New Zild twang.